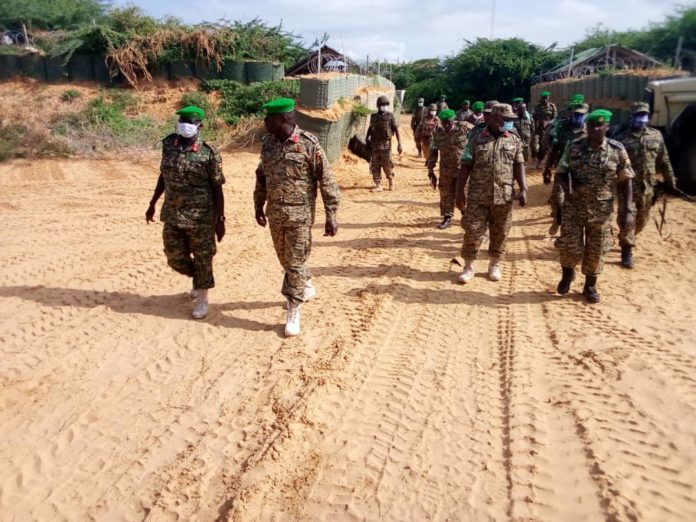 Baraawe Friday June 19, 2020 – The Contingent Commander of Uganda troops serving under the African Union Mission in Somalia (AMISOM), Brig. Gen. Richard Otto on Thursday visited Ugandan soldiers based in the coastal town of Baraawe in Lower Shabelle region, about 208 km from Mogadishu.

Interacting with the soldiers in Baraawe, the headquarters of Uganda’s Battle Group Twenty-Nine (BG XXIX), Gen. Otto commended them for their discipline and reminded them of their core task to protect civilians, secure population centers and ensure peace and security.

“I want to congratulate and thank you all, from the commanders to the soldiers for being on top of the security situation here. You have managed to defeat Al-Shabaab in this area and hold ground” Gen. Otto said.

Brig. Otto noted, that AMISOM troops had played a critical role in the recent recapture of Janaale town, located 95.8 km southwest of Mogadishu. The terrorists, Brig. Otto noted, used to plan heinous crimes against innocent civilians from the town. Gen. Otto commended the soldiers for their vigilance, mentioned that a total of sixty Improvised Explosive Devices (IEDs) and two Vehicle Borne Improvised Explosive Devices (VBIEDs) had been destroyed in Barawe since January. He said this reflected the combat readiness of AMISOM troops.

He urged the troops to continue to adhere to the safety protocols for COVID-19 to prevent the spread of the virus. He wanted them to however remain alert, noting that Al-Shaabab still poses a threat, especially to the civilian population.

The BG XXIX Commander, Col. Edward Kaddu, thanked the Contingent Commander for his support and pledged to continue working closely with the local administration, communities, and cultural leaders to peaceful co-exist to maintainpeace and stability in the area.

The Uganda contingent commander was accompanied on the tour by the commanders of Uganda’s BG XXVII, XXVIII-Col. Sam Kosiya Kutesa and Col. Wilberforce Sserunkuuma, respectively and the AMISOM Sector One Chief Administrative Officer, Col Elvis Byamukama.