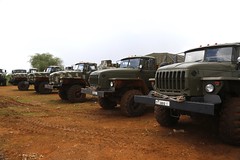 Mogadishu, 28 April 2020—The Force Commander of the African Union Mission in Somalia (AMISOM), Lieutenant General Tigabu Yilma, says that the operational capability of his forces and their capacity to conduct offensive operations against the enemy remains high.

Lieutenant General Yilma was speaking  in Baidoa on Monday, where he commissioned new operational vehicles and military hardware, which will add firepower and increase the mobility of AMISOM forces in clearing main supply routes, securing population centers and degrading Al-Shabaab terrorists in the Southwest State.

“I am here in Baidoa to unveil our new equipment. We have to ensure that our forces are properly trained in using this military hardware and are able to take care of it. With proper training and use of this equipment, I have no doubt that the we will succeed in delivering the AMISOM mandate,” he said.

The Force Commander was pleased by how the Ethiopian National Defense Forces (ENDF) were effectively implementing the AMISOM Concept of Operations and advancing the Somalia Transition Plan. Under the transition plan, AMISOM forces are working closely with the Somali Security Forces in gradually handing over security responsibilities of the country ahead of AMISOM’s anticipated exit from Somalia.

“As you know, we are implementing the Somalia Transition Plan, which is based on our Concept of Operations. This requires us to secure population centers and main supply routes. To do that, we need highly mobile equipment to enable us conduct effective offensive operations against the enemy,” he said.

On landing in Baidoa, the Force Commander was received by Sector three-commander, Brigadier General Alemu Ayene and other AMISOM officials. Hewas immediately taken round to the inspect the all-terrain vehicles, battlewagons and an assortment of operational equipment to be used by the troops. 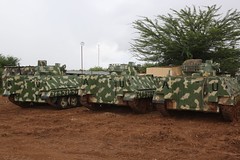 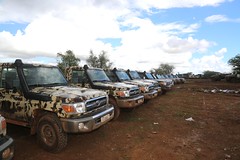