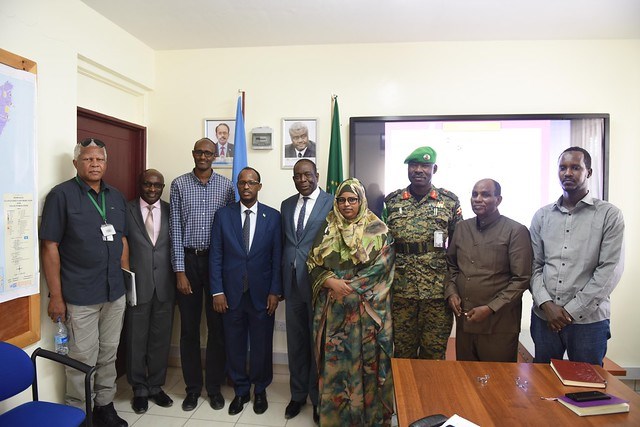 The Federal Government of Somalia (FGS) and the African Union Mission in Somalia (AMISOM) on Wednesday commenced a physical audit of companies and organisations operating within the Aden Abdulle International Airport protected area.

The audit, targeting companies and organisations contracted by the United Nations and AMISOM, is aimed at ensuring the private entities operate within the laws of the country.

“The Somali government is conducting the audit for accountability and transparency purposes and to make sure that every company is operating within the laws of the country,” said the audit team leader Dahir Salat, who is also the senior operations advisor to the Federal Ministry of Foreign Affairs and International Cooperation.

Mr. Salat said the audit exercise will be conducted every three months to ensure the Somali government keeps an up-to-date database of all entities operating within the airport’s protected area also referred to as the green zone.

“This is the second joint FGS, AMISOM and UN audit  creating a database on individuals, companies and organisations working in the airport camp also known as ‘Halane’” he added. The inspection involved verification of land lease agreements, tax records, vehicles owned, number of workers and waste disposal mechanisms among others.

AMISOM Head of Safety and Security, Micah Ncube said the exercise will help AMISOM, the UN and the Federal Government of Somalia to account for the number of organisations, companies and workers operating within the green zone.

“This exercise will also help us to properly document the land allocation, lease agreement and usage of land inside the Mogadishu International Airport,” said Ncube.

The audit is also aimed at enhancing security within the green zone by ensuring companies and workers operate within the rules and regulations set by the federal government.