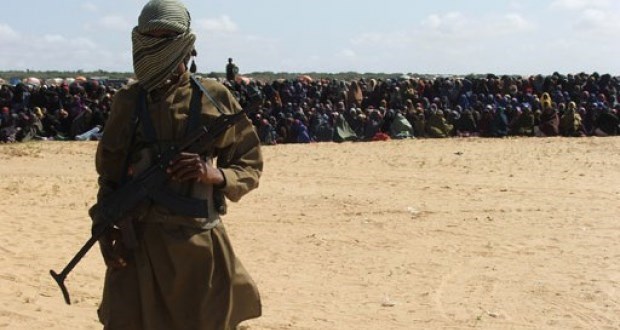 Somali militants Al-Shabaab have executed four men for allegedly engaging in espionage against the group.

Among those executed publicly was a 25-year-old Kenyan, Omar Adar Omar, who was from Garissa and who was killed by a firing squad on Monday.

The terrorist group accused the four of spying for the Africa Union Mission in Somalia (Amisom).

Kenya Defence Forces is part of the mission that is fighting the terror group in the unstable country.

The other victims of the execution were identified as Abdirisack Hashi Abas, Mustaf Moalom Hassan, and Mohamed Aba Mayow, according to a security document seen by Nation.

Al-Shabaab militants rounded up residents of Bu’ale Town, including women and children to witness the killing by a firing squad.

“In areas under its control, Al-Shabaab has carried out numerous executions, floggings, and amputations after summary trials in cases ranging from espionage to theft,” the report also said.

It is not the first time the terror grouped linked to Al-Qaeda, and most recently the Islamic State, has executed militants suspected of spying, most of them foreigners.

In 2015, Mustafa Hassan Mohamed, a former student at Isiolo Boys High School, was executed after he complained that Al-Shabaab attacks in Garissa and Mandera targeted Muslims and children.

Mustafa, who dropped out of school to join the terrorists was accused of being sympathetic to Kenya.

The document also says that a number of Kenyans, who are high ranking in Al-Shabaab’s military wing, and faced with threats of execution, are “looking for a way back to Kenya even if it means negotiating with the Kenyan government.”

Ahmed Iman is thought to be the highest ranked Kenyan in the terror network.

The militants, are fighting to topple the UN-backed Somalia Federal Government.

Infighting within Al-Shabaab has also escalated in recent months.

One faction wants to remain in partnership with Al-Qaeda while another has pledged allegiance to the Islamic State.

“Currently the terrorists group is faced with formation of splinter groups. One comprises local native Somalis and another group is dominated by international fighters,” the report also says.

It adds that the suspected spies were killed by masked gunmen at an open ground surrounded by the residents.

KDF first deployed soldiers in Somalia in October 2011 in the Operation Linda Nchi before they were amalgamated into Amisom the following year.

Under Amisom, Kenyan troops are deployed in Sector 2, Somalia but have over time been carrying out operations in other areas which are not manned, whenever Al-Shabaab set up camps there.

Other sectors are occupied by forces from Ethiopia, Uganda, Burundi and Djibouti.

The Juba regional leader, Sheikh Mohamed Abu Abdalla, announced at a public square in Bu’ale Town that the Al-Qaeda-linked jihadists executed the four after they were sentenced by an Islamic court.

Bu’ale Town, over 500km south of Mogadishu, is the capital of Middle Juba, a region vastly controlled by Al-Shabaab.

“The men had been captured several weeks ago and an Islamic court had sentenced them to death for spying for the enemy,” said Sheikh Abdalla.

“They have been executed today (Monday) for the crime they had committed,” he added.