A court in Djibouti on Thursday handed down jail sentences to a number of officials accused of graft and of listening in on conversations between the president and top commanders.

Former Djiboutian police chief Abdullahi Abdi Farah, who was arrested in February on suspicion to seize power in a coup, was sentenced to three years.

Two other officials were given jail terms for eavesdropping on conversations between President Ismail Omar Ghuelleh and top security officials. They have also been found guilty in leaking state secrets. 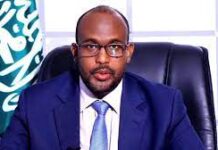