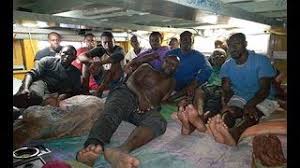 Fifteen Kenyan seafarers are captives aboard a Somalia-flagged fishing vessel off the Coast of the Horn of Africa country.

The 15 were recruited through a Kenyan agent in April.

International Transport Federation inspector Betty Makena on Thursday said the agent is a fraud– he is not registered with the Kenya Maritime Authority.

“They are working at gunpoint. As a seafarer, you cannot work at gunpoint; otherwise, you become a slave,” Makena said. “They will be leaving for Djibouti in eight days.”

“We moved from Sh26,000 a long time ago. It is like these people were taken to do slave work,” the ITF inspector said.

One of the Kenyans has been injured in the leg and requires medical attention, she said.

Makena is worried that if this is not done in good time, the injury could complicate the health of the seafarer.

The seafarers have not received a single cent and want out of the vessel.

When they got in touch with Makena and narrated their ordeals, she tried calling the owners of the ship but the numbers provided in the contracts never went through.

The vessel has other foreigners who are also complaining.

This development comes barely three days after President Uhuru Kenyatta witnessed the signing of a deal between the Mediterranean Shipping Company, the Kenya National Shipping Line and the Kenya Ports Authority under which more seafarers will be recruited by the Swiss-based MSC.

Uhuru also commissioned the Bandari Maritime Academy that will train world-class seafarers to be hired by international shipping lines.

The long term plan is for Kenya to own shipping vessels to give Kenyan youth jobs.

It plans to harness the potential of the blue economy, expected to inject up to US$4.8 billion (Sh480 billion) to Kenya’s economy and create over 52,000 jobs in the next 10 years.

Makena said the ‘fake’ manning agent is in Mombasa but has switched off his phone after initially promising to get in touch with her.

The fishing vessel is owned by a businessman in Somalia.

The Kenya Maritime Authority has been contacted to help secure the release of the Kenyan seafarers.

The State Department of Maritime Affairs in the Transport ministry has got in touch with their Djibouti counterparts to help rescue the Kenyans and the other foreigners once vessel calls on the country’s port.