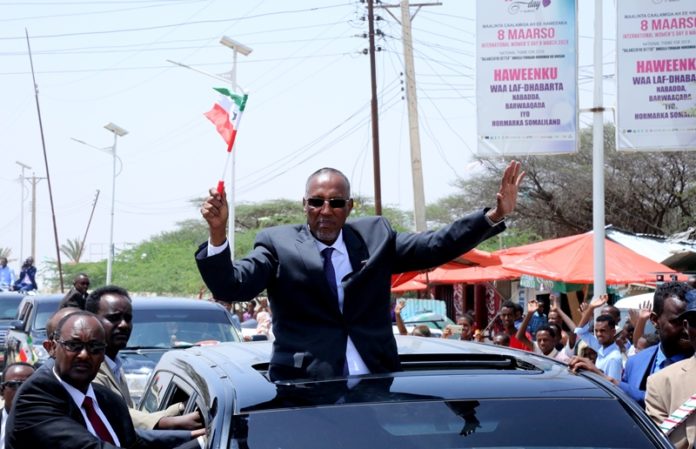 The Republic of Somaliland does not officially exist despite it being self-governing since 1991, with its own currency, flag, Constitution and national anthem. Instead, it is considered to be a renegade province of Somalia proper, theoretically subservient to the sovereignty of Mogadishu.

The irony is that while the rest of Somalia has been wracked by conflicts over the past two decades, Somaliland has been stable, peaceful and relatively prosperous. Nonetheless, the official recognition which it craves has eluded the territory.

This may be changing.
Last week, Somaliland’s President Muse Bihi Abdi flew from his capital Hargeisa to Conakry, on the other side of the continent, where he was welcomed by Guinean President Alpha Condé as a fellow head of state. In these delicate matters, the details are important.

The red carpet was literally rolled out for Bihi, while the flags of Guinea and Somaliland were given equal prominence in photographs of the two leaders.

Mogadishu was incensed, announcing that it was severing diplomatic relations with Guinea.

“The decision comes after Guinea accorded the protocol of a head of state in Conakry, Guinea to the leader of a separatist movement in Somaliland in northern Somalia, callously disregarding all relevant [United Nations] resolutions and African consensus,” Somalia’s foreign ministry said in a statement.

Not that there was much in the way of diplomatic relations to sever: neither Guinea nor Somalia maintains embassies in each other’s countries.

Somaliland’s response, delivered by one of its best-known residents, was just as barbed. “Somaliland has visited and has been warmly received by more than half the nations of the world, with repeated visits to many of them,” said Edna Aden Ismail, a prominent civil society leader and former foreign minister, Somaliland Press reported. “We therefore find it very disrespectful and embarrassing to hear that Somalia has severed diplomatic relations with the free and great sovereign country of Guinea for having hosted our president.

“Does Somalia plan to sever relations with the other 90 countries in the world who have also hosted our government and delegations over the years? Or was this a singular and direct attack and disrespect to His Excellency Alpha Condé, president of Guinea?”

Aden was not finished. “Having perfected the art of terrorism as the world’s worst failed state, is Somalia now trying to introduce a new kind of terrorism to Africa, one which can be described as diplomatic and political terrorism?”

Guinea was not the only country to get on Mogadishu’s bad side this month. Also in trouble was Kenya, which referred to Somaliland as a country in a tweet from an official account. Kenya’s ambassador to Mogadishu was summoned to the ministry of foreign affairs and hauled over the coals.

“We consider this tweet an affront to Somalia’s sovereignty, unity and territorial integrity as well as harmful to the relationship between Somalia and Kenya,” the foreign ministry said.

Mogadishu’s panic is understandable. Not only would a genuinely independent Somaliland represent a huge loss of territory (although to all intents and purposes, that ship has already sailed), but it also risks inflaming secessionist movements in the rest of Somalia.

“Independence for Somaliland is [the] hardest, most unpalatable option for Somalia. It has the potential to foment a serious political crisis in Mogadishu, inflame nationalist sentiments, at least in the short term, and trigger armed conflict,” observed Rashid Abdi, an independent political analyst, in comments on social media.

But international recognition may bring risks for Somaliland too, Abdi adds, especially given that it is battling its own secessionist movement in the Sool and Sanaag regions.

For now, Somaliland’s dream of true independence remains just that — a distant dream. But that red carpet in Conakry is the strongest indication yet that the dream is not entirely impossible.