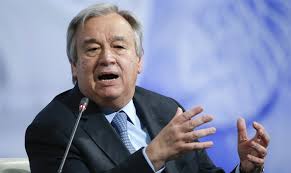 Somalia is making progress toward building a functioning state but must still tackle violent extremism, terrorism, armed conflict, political instability and corruption, the U.N. chief said in a new report.

Antonio Guterres said in the report to the U.N. Security Council circulated Monday that these challenges “demonstrate the fragility of the gains made so far” and “threaten progress.”

After three decades of civil war, extremist attacks and famine, Somalia established a functioning transitional government in 2012 and has since been working to rebuild stability. But Guterres said that “the security situation remained volatile” between the mid-December and early May reporting period.

The militant group Al-Shabab, an al-Qaida affiliate, continues to be “the main perpetrator of attacks against government facilities, government officials and security forces as well as popular restaurants and hotels,” he said.

Guterres said March and April witnessed “a significant increase of attacks in Mogadishu, where incidents involving improvised explosive devices occurred almost every day.” In March, he said, there were 77 such attacks across the country, the highest single monthly total since 2016.

In addition, Guterres said, there was “a notable increase in mortar attacks, which demonstrated Al-Shabab’s improved capacity to hit strategic targets with precision and accuracy.” And the militant group continued to carry out attacks using suicide vehicle-borne improvised explosive devices, he said.

At the same time, the secretary-general said, the reporting period saw an increase in security operations “and a large number of air strikes targeting Al-Shabab training bases and assembly points” that were deemed to have degraded its operating capability and freedom of movement.

“They have also led, however, to increased Al-Shabab movement into urban centers, in particular Mogadishu, where their forces are less likely to be targeted from the air,” he said.

In addition to security threats, Guterres said large segments of the Somali population face poverty and a lack of food. He said the World Bank estimates in a forthcoming poverty and vulnerability assessment that 77% of Somalia’s population is living below “the international extreme poverty line of $1.90 per day.”

“Poverty is especially deep and widespread in rural areas and in internally displaced persons settlements,” Guterres said. “Almost 90 percent of households lack access to basic services, such as education and water and sanitation.”

The United Nations launched an appeal Monday for $710 million to help 4.5 million drought-affected Somalis in the most severely affected areas of the country between now and the end of December. U.N. spokesman Stephane Dujarric noted that the 2019 U.N. humanitarian appeal for more than $1 billion for Somalia is only 20 percent funded.