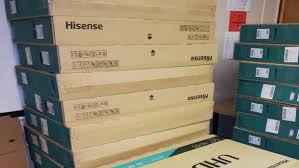 Officers found 42 brand new television sets loaded inside a truck that was stolen from an Atlantis warehouse on Thursday with a total value of R360 000. Picture: Supplied/SAPS

Cape Town – An integrated operation between members of Flying Squad and Provincial Operational Command Centre led to arrest of three Somalian nationals aged 28, 29 and 29 on Thursday evening at 6pm.

The members were busy with patrols, when they spotted a truck which resembled a one stolen at an electronic company in Atlantis earlier that day.

The truck was pulled off in Durban Road, Bellville, and upon searching the vehicle they found 42 brand new television sets loaded inside with a total value of R360 000-00.

An initial investigation discovered that it was the same truck and cargo that were stolen from an Atlantis warehouse.

The suspects are expected to appear at Bellville Magistrate court on Monday morning for the possession of stolen property.

On Wednesday, in an unrelated incident, three suspects aged between 27 and 30 were arrested at about 5pm in Lwandle.

A complainant opened the case of motor vehicle theft at Lwandle SAPS on Wednesday morning and police members conducted a sterling investigation and arrested three suspects who were driving around with the stolen vehicle.

All three suspects were arrested for possession of stolen property and members will investigate and check if the suspects are linked with other case of motor vehicle theft that have occurred in the area.

Additionally, Lwandle SAPS were conducting crime prevention patrols which led to the discovery of a stolen engine and another abandon motor vehicle.

A suspect aged 52 was arrested for possession of presumed stolen property.

All four suspects are expected to make a court appearances at Strand Magistrate court on mentioned charges.