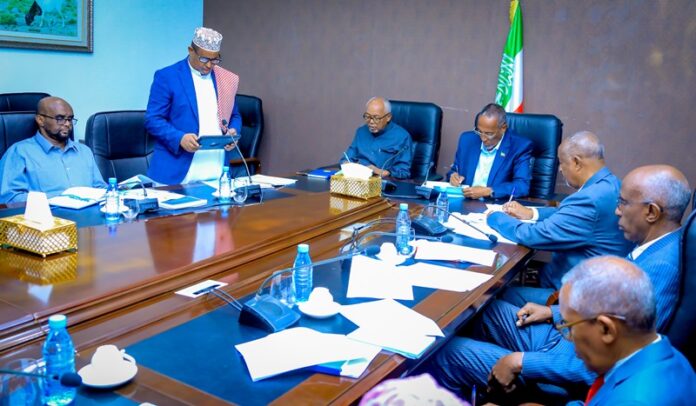 THT- The 102nd session of the Council of Ministers of the Republic of Somaliland chaired by the President H.E. Musa Bihi Abdi has urged the members of the public to hold the forthcoming elections in a peaceful atmosphere and a harmonious scenario.

It also stated that the plans of the holding of the elections have already been finalized hence it should be held as per National Elections Commission’s (NEC) stipulated schedules.

This and more were the issues the cabinet dwelt on and pondered on Thursday 10th of November with a particular focus on national security, economic development plans, and inventory of immovable government properties.

The Head of State was flanked at the weekly cabinet meeting by the VP H.E. Abdirahman Abdillahi Ismael.

In his brief, the Minister of Interior Hon. Mohamed Kahin Ahmed informed the cabinet on the general security situation in the country noting it as very stable.

He praised the various security arms for their diligence in their duties while pointing out that they excelled due to the constant collaborative support they get from the populace.

The council also heard a report from the Minister of Public Works, Housing and Lands, Hon. Abdilahi Abokor Osman regarding the registration of immovable property of the Government and how far the task has reached.

He noted that his ministry collaborated with the treasury department on the chores.

The cabinet was in general consensus that the work on the inventory ought to be concluded successfully.

On the other hand, the Minister of Justice Hon. Suleiman Warsame Guleed aided by the Attorney General, Hon. Abdisamad Omar Maal explained to the Council the amendments made to the Law on Legal Aid Services, a matter the Council scheduled to discuss in details during their future sessions.

Finally, the cabinet noted that the government has completed all its duties regarding the elections; such as security operations and funding with the government adhering to the plans of the timelines that the NEC has set; thus as per the registration of voters and the holding of the elections.

They urged all the people of the country to participate in the elections peacefully and in a harmonious setting.