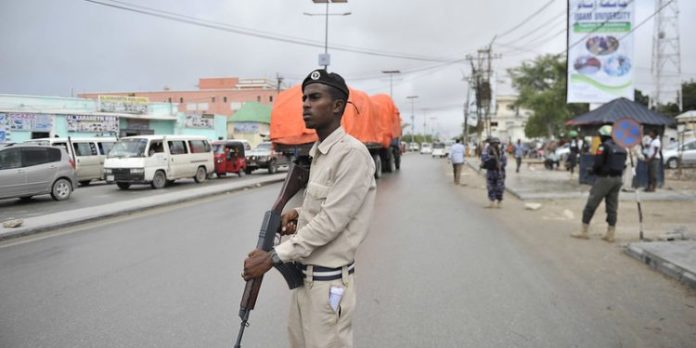 One of the first things president Farmajo promised during his campaign more than two years ago was that Mogadishu residents will not suffer from road blocks anymore. He was well aware of the burden on the civilians and so he had to drive this point home.

One month after he was elected, President Farmajo appointed Hassan Ali Kheyre as the prime minister of Somalia who literally took the whole road closure story to another level under his security stabilisation policy.

The face of Mogadishu changed for the worse after the city residents woke up with main streets closed with sand and rocks. After the residents decried this move and many complaints reached the president’s desk, Farmajo had canceled the security stabilisation policy and ordered the forces to go back to their camps. The residents felt some sense of ease and the access of the city became easier although the decision came along with consecutive explosions and attacks that killed many people.

However, that did not last long. Every time an attack happens, the government’s response is more road closures. It was again back to hell. Most people had to use rikshaw to come from the northern districts of the city (Yaqshid, Wardhigley, and Karan) to reach the southern parts of the city (Hamar Weyne, Waberi, Hodan districts).

Many of the residents opt to leave their cars at home since crossing from one checkpoint to another is a daunting and tiresome thing to do more so when someone is going to work or for other important businesses. Road blocks are almost every where and the harassment posed by the soldiers manning some of the roads is rampant.

The lesser of the two evils

Yes, its a fact that the road closures reduced the number of attacks in the city. It seems to have reduced the causalities brought about by vehicles packed with explosives. You will hear government officials and large sections of the community endorsing the idea of closed roads if at all it can deter and reduce the number of elections. But I don’t think this is a sustainable approach.

The business community had a number of times complained about the closed roads and how it has affected their business.

Businesses in the Hamar Weyne Market and many other places get their supplies from the famous Bakara market (the biggest in Somalia). However, they always struggle to transport their goods from Bakara to Hamar Weyne. They pay the tax and at the same time suffer the most.

Real estate is one of the sectors that is also affected by the road closure. Some of the houses in Mogadishu have experienced depreciation in terms of rent owing to the difficulty in accessing the roads leading to those neighborhoods.  The companies with branches both in the north and the south always have a problem with picking up their staff and the equipment to the offices. Mineral water companies that deliver purified water to the different parts of the city are also hardly hit.

Many students in the schools and universities of Mogadishu face challenges in accessing their centers of education. Universities sometimes have to postpone exams and lessons due to closed roads. Students from far neighborhoods also trek miles since the public transport have little or no access to some of the parts of the city.

But the case is not the same for everyone. Most of the times it is only the ordinary people who suffer because of the closed roads. Government staff and people with connections are also enjoying the privilege of accessing any part of the city even when some of the main roads are closed. All they have to do is just to show their IDs and/or talk to a senior security officer they know. Some of the security officials who are in charge of the check-points solicit bribes and let go anyone who pays them.

Although the government has banned big vehicles like lorries and trucks to operate during the day in the city as they may be used for explosions, the new Mayor, Omar Filish, pledged that the roads will be opened soon but most Mogadishu residents believe that it his promise is nothing different of the usual unimplemented promises made by the government.

Recently, drivers of the PSVs took over the KM4 and KM5 junctions protesting the road closure and pleading for a quick action. Due to the closed roads, they are hardly able to pay for the fuel leave alone putting food on the table for their families. “We can’t pay heavy tax (15 $ per month) only for us to be harassed by the police and most of the main roads closed,” said one of the angry drivers I met.

Mogadishu elders and other elites have also issued strong statements calling on the government to open the roads as it is badly affecting the businesses and the lives of all and sundry.

While the public is asking for an immediate action on this issue it seems all those complains fall on deaf ears. On Wednesday, October 30th, 2019, the government even went ahead and new stones and sacks full of sand were laid in parts of the city including Siisii, San’a junctions and Heliwa district.

Somali government’s policies on security always change with the new tactics of Al-Shabaab and attacks on government institutions and other centers that are under potential threat in the city.

During the tenure of the late Abdullah Yusuf, the roads used to remain closed whenever a government top official (President, Prime minister or Parliament speaker) was either landing in or taking off from the airports. This security measure didn’t deter the attacks from the Islamists who still managed to throw mortars at the airport and target government institutions and functions.

However, the road closure has since then become a culture and the a common mechanism for the subsequent governments.

In the interest of the public, I think the government needs to think about a pragmatic strategy that will secure the city without compromising people’s movement. The government should benchmark on best practices from other countries and invest heavily on sustainable security measures. The current way of doing things proved futile and I don’t see it as an approach that can serve the interest of the city in the long run.

Moreover, the government needs to increase the budget for the security forces. I applaud that it had reviewed the salary of the soldiers for the first time in a decade but that is not enough. The Somali security forces should be paid well, equipped well and the intelligence sector modernised in order to prevent attacks.

The views expressed in this article are the author’s own and do not represent the views of Somali Focus’s editorial policy.

Adan Bulale is a blogger based in Mogadishu. He is passionate about and vocal on social issues and is currently the coordinator, Institute of Modern Languages at SIMAD University.