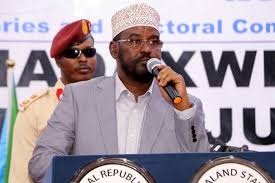 Jubaland state gov’t has presented a compliant to the United Nations against sections of Ethiopian Forces which they say are not part of the African Union Peacekeeping Mission in Somalia.
Ethiopia is troop contributing country to Amisom and also borders Somalia to the south that is Jubaland state.
In a communique letter, Jubaland interior and local gov’t minister wrote to ambassador James Swan, the United Nations Secretary General Special representative to Somalia.
Jubaland says the non Amisom forces of Ethiopia and Framajo regime have colluded to disintegrate Jubaland security forces in northern Gedo region.
The state says the once organized security forces are on the verge of collapsing and bringing down to clan militia.
Jubaland administration also noted that most of the appointed district officers in Gedo region are being coerced by the Ethiopian forces to fly them to Mogadishu.
The two administrations that the Federal Gov’t led by President Farmajo and Jubaland administration administrtaered by Ahmed Islam aka Ahmed Madobe had been locked horns.
The former refuse to recognize the latter as the legitimate president of Jubaland state.
Ahmed Madobe is in Kenya with the speculation rife with the stance whether the SFG might change after president Uhuru Kenyatta and President Farmajo met in Nairobi last month.
The two states had a difference on the maritime spat between Kenya and Somalia.
Nairobi has been a close ally with Ahmed Madobe as supported him since Kenya defense forces took Kismayo and large swathes of Jubaland in 2011.