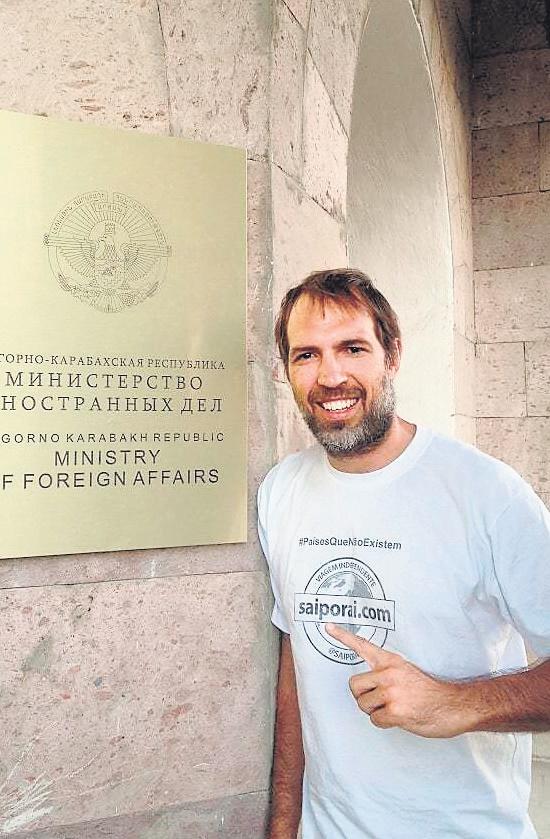 Somaliland has its own government and its own currency. To enter, one should also have a Somaliland visa. You might say that this is the case with all countries. But there is a catch. No other country recognises the existence of Somaliland.

A former British protectorate, it was once part of the Somali Republic before declaring its independence in 1991. Brazilian journalist Guilherme Canever, who travelled to this country in 2009, says, “Travelling was different back then, no smartphones and apps.

I had to exchange money into Somaliland Shillings, the local currency. They had their government, flag, police force, newspapers and other institutions working, but no other country recognised them. It felt a bit like a parallel universe.” That experience was enough to make Canever go looking for other places that were officially non-existent. Surprisingly, he found quite a few. Since then, this 43-year-old has been to 16 such places.

“These countries have their own history, conflicts and reasons to become independent. A few of them are used to getting tourists, but not all. Military and police, in general, can be overly suspicious, and sometimes you can end up in a tense situation. But the freedom to discover great attractions that are not stamped on a travel magazine or everywhere on the internet is rewarding. The downside, of course, is the effects of recent conflicts and economic problems.

But seeing difficult situations can get you great insights. It is good when you come back with more questions than answers,” says Canever.

Based on his travels, he has published four books, but insists they are “not guide books, I write about my personal experiences.” One of the books covers a part of his India travels.

“I’ve been to India thrice, spending a few months each. It is the most diverse country in the world. What are the similarities between Tamil Nadu and Ladakh, for example? None. In the same country you can try so many different cuisines and cultures. It’s amazing,” he says.

His latest book to hit the stands is the Unrecognized Nations: Travels to Countries that do not Exist.

From discovering ancient monasteries in the middle of the mountains of Nagorno-Karabakh, to visiting Agdam, a ghost town completely devastated by war, it is a balance of the best and the worst that defines his travels. His experiences in Transnistria and Abkhazia were like time travel, he reveals.

“You would have Mercedes-Benz and BMW along with old Lada cars. Abkhazia also has beautiful monasteries. I went to the beach, hitchhiked and tried the local wine. In Northern Cyprus, I stayed with a local family. My host took me all around the island, but while crossing Nicosia—the capital—he was held back.

He was born in Northern Cyprus and so was not allowed to go to the southern part of the island. Not far from Varosha, another ghost town devastated by war, I was treated to one of the most delicious meals. Kosovo, a partially recognised state, has beautiful historical towns, full of tourists during summer, with kids playing on the fountains,” Canever says.

But it is not always easy finding an entry into these countries. With the Brazilian passport, Canever could get a visa on arrival at Kosovo, Northern Cyprus, Palestine, and occupied (by Morocco) Western Sahara. But the writer remembers how trying to get to the Western Sahara free zone almost got him into trouble. “I ended up in the middle of a mined area,” he says.

For Abkhazia and South Ossetia, he says, one needs to have a previous permit. “You show up at the border with this permit issued on the internet and then you go to the Ministry of Foreign Affairs to get the proper visa.

For Nagorno-Karabakh, you just cross from Armenia and get a visa in the capital, Stapanakert,” he says.

But, he stresses caution, “Be aware of the conflicts. You cannot cross Nagorno-Karabakh from Azerbaijan. If you do it from Armenia, you will cross Azerbaijani land occupied by Armenia. It is considered illegal. You can have problems visiting Azerbaijan later.

From Georgia it is okay to visit Abkhazia, but again you should not cross into Russia, which is an illegal border crossing.”

It’s like a big jigsaw puzzle where one has to know the right places to fit the pieces.

And that is exactly what Canever is doing at the moment as he plans on a road trip from Cameroon to the Central African Republic via the Sangha forest and a boat ride back to the Congo once the pandemic is over.