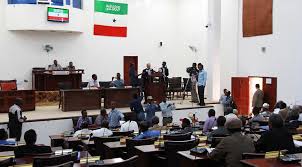 The Parliament is planning to drop a proposal for a percent of seats in a new national assembly to be set aside for women.

This was disclosed by the internal affairs, security and defense committee of the House of Reps after having submitted to the parliament election law which was amended yesterday.

The new, 82 member assembly is set to be elected in early 2021 who will replace the current lawmakers who have been sitting since 2005.

The chairman of the internal affairs committee, Abdilahi Balaki, while briefing the MP’s reiterated that all men and women have equal rights under the laws enshrined in Somaliland constitution.

He insisted on having the election law been amended that parliamentary women’s quota have been scrapped in the upcoming polls.

The Committee said that the article reserving seats for women in the parliament is against the country’s constitution and therefore called on the MP’s for its abolishing.

The chairperson further called on the MP’s to take the right decision when it comes to the controversial parliamentary seat allocations in Somaliland.

The parliamentary seat allocation in the country has caused backlash among the populace.

The election law which has been reviewed and amended by the internal affairs committee was distributed to the MP’s who will have a look at the amended law and is due to hold a debate about it within the coming days.