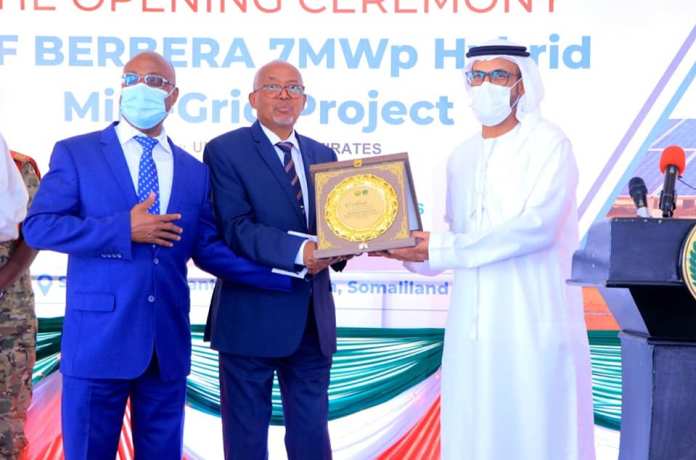 The 7MW Solar Energy project in line with Energy’s developmental infrastructure of the country was set up in Berbera in a very short period, at a time when the world was affected by the Coronavirus.

The center which will be linked to the district electricity network, in line with the growing demand is aimed to meet the electricity necessities of the Berbera district community, which can be estimated at 50,000 people, was funded 7.98 Million Dollar by the Abu dhabi Development Fund.

The project which will advance progression in Berbera cosmopolitan facet is expected to significantly reduce electricity tariffs, in addition to helping the country’s economic development and reducing carbon emissions.

The project was unveiled by the Vice President of the Republic of Somaliland H.E Abdirahman Abdillahi Ismail accompanied by the Minister of Energy and Minerals   Hon. Jama Haji Mohamud Egal. The Ministers of Finance, Health Development, & Investment were also present, along with hundreds of government, regional and districts officials, MP’s, Political Parties, and guest invited.

Mr. Mohamed Sayf Al Suwaydi, Director General of the Abu Dhabi Development Fund speaking at the event expressed his satisfaction with the completion of this project which was completed within 7 months, from March to October 2020, at a hard time were Coronavirus infection affected worldwide.

“This renewable energy project in Berbera will play an important role in our large-scale efforts to boost the country’s economy and improve the living standards of the people in this area,” he said. Adding “The need for energy is constantly growing in Berbera as the population grows. This project will provide electricity to people at an affordable price, as it will replace the use of expensive fuel with solar energy. This will lead to higher economic activity, access to savings, and reduction of carbon dioxide emissions to provide clean and quality air. This will bring significant and tangible change to the city. ”

Hon. Jama H. ​​Mohamud Egal, Minister of Energy and Minerals expressed similar sentiments, underlining the importance of this solar energy project in the country’s sustainable development efforts. “The center will play a key role in our efforts to reduce electricity cost and tariffs, and in our efforts to reduce our dependence on fossil fuels,” he said. This will lead to the availability of savings that will boost people’s income.

“This project will have an immediate impact on an estimated 50,000 people in Berbera district, in addition to its long-term positive impact on the entire nation.” The Minister added, “Importantly, the project will help meet the growing demand for business growth in the district as well as the expansion of the Berbera port.”

The Minister thanked the Abu Dhabi Development Fund, for the completion the project in a very short time, despite the many challenges. “The project has come at a critical time,” he said, praising the UAE’s role as a whole and the Development Fund’s support to Somaliland in terms of infrastructure development.

A Memorandum of Understanding (MoU) was signed at the ceremony, witnessed by the Abu Dhabi Development Fund, which will transfer ownership of the facility to the Ministry of Energy and Minerals on behalf of the Republic of Somaliland, and appoint a consulting firm, Coretec, to support the Ministry of Energy and Minerals with the necessary guidance needed to establish the overall operational framework for the facility.

In principle, it was agreed that the facility would be a Public-Private Partnership (PPP), to operate and renovate the solar power plant, the first of its kind in the country. “This could be a good example for the rest of the country,” he said.

Somaliland is one of many countries in Africa that the Abu Dhabi Development Fund supports the government to achieve its development goals. In 2017, the Fund allocated 330 million Emirati Dirhams ($ 89.8 million) for the development of key infrastructure in Somaliland. Part of this money will be used for the Berbera-Hargeisa road project, which was laid in stone at 2019.

The Vice President of the Republic of Somaliland, H.E Abdirahman Abdilahi Ismail Saylaci, thanked the UAE Government for implementing the project in Berbera and congratulated the people of Berbera on the availability of affordable electricity. 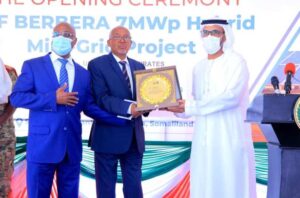 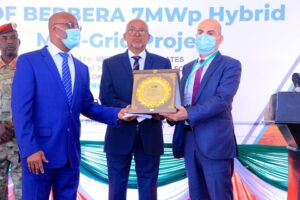 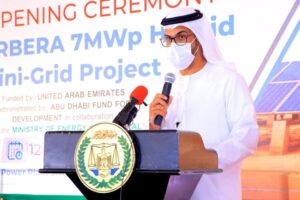 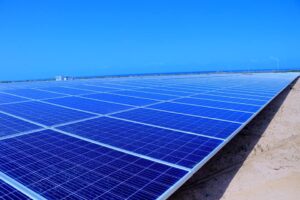