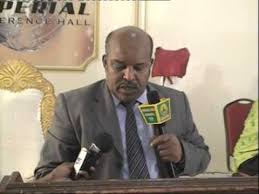 HARGEISA–The Attorney General of Somaliland has confirmed on Sunday that the office of the auditor general has submitted two corruption charges against the ministries of defense and the information for indictment.

Mr. Hasan Ahmed Adan has announced that justice will prevail and that his office will take legal path to sue the officials who have been accused of committing graft.

The AG has further admired that the corruption allegations that the ministry officials have committed is a serious one and swift actions will be taken against them.

First of all, the auditor general has conducted investigations into the ministries and the cases have been filed at the office of attorney general.

Mr. Hasan has said that in consideration with the country’s laws and constitutional that his office reserves  the overall right to review the accusations that have been submitted if there are genuine evidences for bringing the officials for indictment.

The AG has stated that once he is convinced with the corruption charges then that he will demand the sued officials to call on the president to relieve from all their duties so that they will commence the trail.

The AG has expressed his disappointment with the country’s courts which have released officials on bail who were taken into custody for corruption allegations.

The AG has further revealed that in line with the anti corruption laws and misappropriation of state assets that officials indicted will not be released on bail.

He urged the court to comply with the execution of laws in lieu of breaking them.

The minister of defense and the minister of information will face corruption charges once the AG issues an arrest warrant for them.