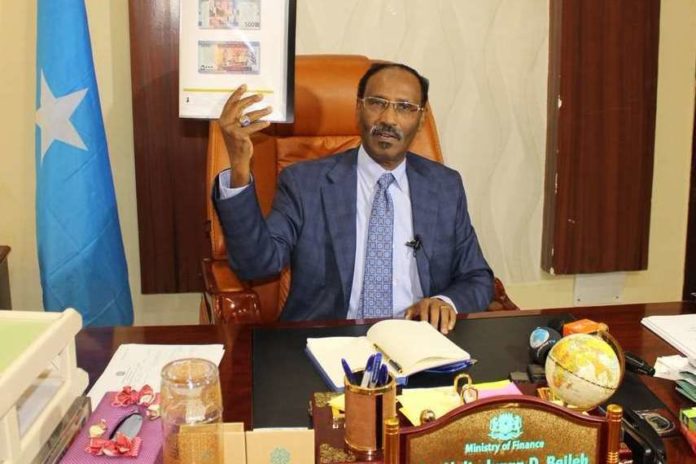 Somalia’s Finance Minister, Abdirahman Dualeh Beileh has said today that Somalia will qualify for a partial debt in the first quarter of 2020 after the country followed several set steps by the international community.

The minister noted the country must work extra hard to meet stringent thresholds by the International Monetary Fund (IMF) in the coming months.

“I want to tell you that we shall qualify for debt relief in the first quarter of next year,” Minister Beileh said. “But before then, we must pass the tough tests.

He said a team from the IMF will visit the country in July, October and December to monitor the progresses made by the financial institutions of the government.

Somalia’s biggest creditor are U.S, Canada and European Union — a group under the Umbrella known as Paris Club whose role is to find co-ordinated and sustainable solutions to the payment difficulties experienced by debtor countries.

External debts accumulated by Somalia’s former governments, left the country with the status of being a heavily indebted poor country that has sizeable arrears to bilateral and multilateral creditors and an external debt of US$ 4.6 billion (as of end 2017).

Somalia qualified for grants under the World Bank’s International Development Agency in September 2018. Ability to access IDA facility is a key step under the HIPC decision point threshold.

In February this year, the Somalia NGO Consortium, a group of humanitarian agencies have called the international community expedite Somalia debt cancellation process for the strengthening of the country’s government and focus the road to peace, poverty alleviation and development.

However in its report in January, the global corruption watchdog, Transparency International once again ranked Somalia as the world’s most corrupt country.

Such low scores indicate that bribery, stealing of public funds, and profiteering by authorities is an everyday fact of life in these countries, says the report.