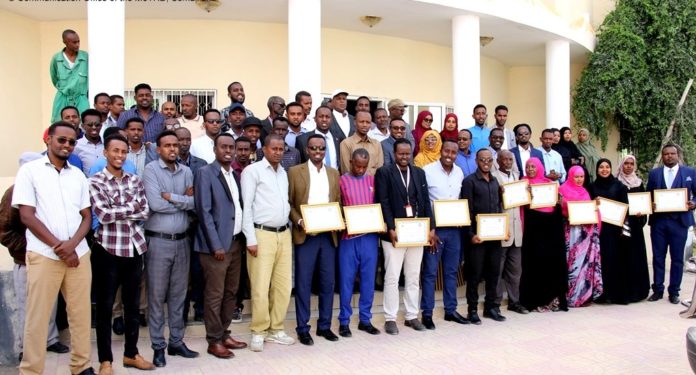 The Ministry of Transport and Road Development of the Republic of Somaliland has presented awards to staff for their work at the Ministry’s headquarters in Hargeisa’s capital city and other regions of the country, those awarded were recognized as the most active and hard-working employees of the year 2019.

Mr. Omar Abdullahi Adan (Omer Sayid), the Director-General of the Somaliland Ministry of Transport and Road Development speaking at the function said that the aim of this event was to recognize and celebrate the workers that are making government a better place to work. We hope to inspire others who are working to make careers in the public sector a satisfying choice as well as a meaningful one.

“The purpose of the event is to reward eligible employees for their work as loyal, capable and being efficient contributors, this event will also motivate fellow your steps as role models. The main choice was attendance and their presence at the workplace and for being creative, hardworking and dedicated,” he said.

He added that out of the 42 workers nominated for the awards by the departmental heads but only 19 were eligible and shortlisted, that is why we thought best to choose those to represent our award categories.

Ministry of Transport and Road Development Agencies departmental heads who spoke during the function stated that the recipients of the awards were drawn from all the various ministry departments based across all the regions of the country.

Mr. Mohamed Ahmed Sugaal , Director of the Human Development Department at the ministry of transport said, “It’s imperative that we should award every hardworking employee and It is an honor and privilege that the staff of the ministry should be praised and I urge the director-general to award hardworking workers once every three months.

Director of the Department of Books, Licensing and Records, Ms. Ayan Abdiaziz speaking on behalf of fellow workers said. It is truly an honor for us today as the Ministry of Transportation and Highway Development staffers is been rewarded for their work, although all staff is worthy for the awards.

Minister of Youth Affairs and Sports, Mr. Boos Mire Mohamed, the Deputy Minister of Livestock Development and Fisheries, Ms. Yurub Abib, Deputy Chairman of Civil Service Commission and other officials who spoke at the ceremony applauded Ministry of Transport and Road Development Agency for setting a good example by boosting the morale and motivating its staff and further lauding the 19 recipients for their achievements.

Minister of Transport and Road Development Somaliland Abdillahi Osman Abokor, who addressed the occasion at the ceremony, congratulated the award-winning staff and urged the entire staff of the Ministry to double the services to the nation.

“We are all winners since nobody would have done so on their own, we serve the ministry of transport and road development agency together, the workers will not only be issued with certificates of appreciation but also with a financial bonus, ”said the minister of transport.

He added, “I really want to thank the staff here again, because the pride we have is the one you have done for us, and Insha Allah we would like to do our best to reward you.”