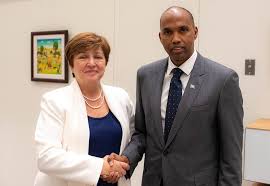 In a statement issued after her meeting in Washington with Somali Prime Minister Hassan Ali Khaire, Georgieva said Somalia was committed to making further reforms despite challenging circumstances, which were aimed at paving the way for debt relief.

The African nation has about $4.7 billion in external debt, accounting for about 100% of its GDP, which the Fund has declared to be unsustainable.

“I assured the Prime Minister of the IMF’s full support for Somalia’s efforts to secure debt relief, including working with the membership of the Fund to secure the financial resources necessary to clear arrears to the IMF and cover the costs of debt relief,” Georgieva said.

“We exchanged views on the importance of securing debt relief under the Highly Indebted Poor Country (HIPC) initiative as soon as possible,” she said in a statement.

Somali officials met to discuss debt relief with officials from the IMF, World Bank and other institutions on Thursday on the sidelines of the IMF and World Bank fall meetings.

“Maintaining strong performance, together with support from international partners, will pave the way for Somalia to receive debt relief in the near future,” Georgieva said.

Somali Finance Minister Abdirahman Duale Beileh said during an event at the Brookings Institution think tank this week that he expected a decision on debt relief in February 2020.

“We are expecting a decision point in February next year,” Beileh said. “We have challenges, but more positive than negative.”

Stephen Schwartz, who served as U.S. ambassador to Somalia from July 2016 to October 2017, said ensuring debt relief was a top priority for the Somali government for the roughly three years it has been in office.

“Getting debt relief would unlock concessional lending from the international lending institutions, which would give them access to a lot of money that they could put to good use rebuilding Somalia,” Schwartz said.