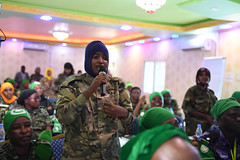 Mogadishu, 25 October 2019 – The African Union in Somalia (AMISOM) on Thursday, conducted training for female personnel in the Somali National Army (SNA) and AMISOM, to raise awareness of women’s participation in peace and security.

During the training, participants reflected on the challenges, successes and shared their experience. They also made recommendations to promote gender mainstreaming in SNA and AMISOM.

As such, AMISOM continues to make progress in implementing international and African-led frameworks to promote gender equality and to empower women.

Speaking at the training, the Head of AMISOM, Ambassador Francisco Madeira, highlighted women’s participation in peacekeeping as a prerequisite to peace and security.

“If we empower and deploy more female peacekeepers, it will have a multiplier effect on AMISOM operations in Somalia,” noted Ambassador Madeira.

Farhiya Mumin, a Member of Parliament, stressed the importance of education and knowledge to implement gender mainstreaming within the Somali security forces. She noted that female soldiers become role models to the people they protect, especially women and children.

“The training is an opportunity to exchange views and share experiences,” Farhiya told the participants.

The AMISOM Police gender coordinator, Stella Sedame, observed that women are critical to the success of AMISOM. “Our Somali counterparts need our support, and in the future, they will be able to assist others,” Superintendent of Police Sedame noted.

Ms. Mané Ahmed, AMISOM Gender Officer, added that the communication dimension of the workshop was considered as such programme is showcasing their sacrifices to help bring peace and stability in Somalia. It will be broadcasted in the local language nationwide and abroad by SNTV and disseminate positive messaging on the important role of women in uniform.

She concluded the training by encouraging the participants to continue breaking through gender barriers and inspire the next generation of women peacekeepers.