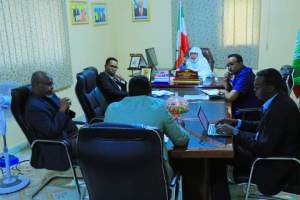 The Mayor of Hargeisa, Abdikarim Ahmed Moge flanked by the Deputy Mayor met with SL’s minister for environmental affairs, Ms. Shukri Haji Ismail Bandare. The Director General of the ministry, Ms. Abdinasir Ahmed Hersi was present at the meeting. The Director General of the ministry, Hon. Abdinasir Ahmed Hersi was present during the high level meeting. At the meeting, The talks between the minister and Hargeisa Municipality officials centered on ways to tackle with garbage, and rearing livestock in the capital, planting trees, and other issues pertaining to matters concerning the beautification and sanitation of the capital. Once the meeting ended, the minister responsible for environment together with Hargeisa Municipality officials conferred with Ethiopian head of diplomatic mission to Somaliland, H.E Saed Jibril. The head of Ethiopian office to Somaliland announced that Ethiopia donated 4 million trees to Somaliland government in order to combat deforestation across the country. The two sides discussed ways of bringing the donated trees from Ethiopia to Somaliland. The officials have discussed once the trees arrive that the Hargeisa Municipality will embark on planting the trees in order to preserve the beautification of the capital. The minister and the mayor together thanked Ethiopia for the generous donation of the trees. Both the minister and the mayor have reiterated that the donation will boost the friendly ties between the two neighboring countries. Both officials promised that Somaliland will benefit from the trees that Ethiopia donated. 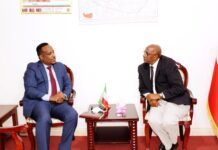