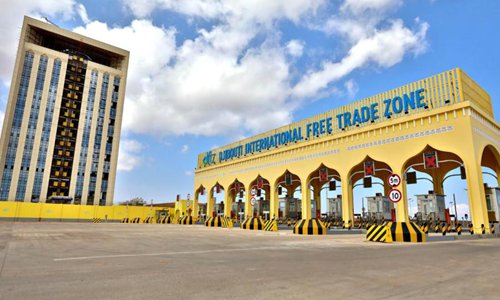 A view of the Djibouti International Free Trade Zone during the zone’s inauguration ceremony in Djibouti on December 9, 2018. Photo: Xinhua

US media’s report claiming that China tried to “constrain international airspace” by barring aircraft from flying over the Chinese military base in Djibouti, flashed lasers at the US pilots and deployed drones to interfere in US operations is completely inconsistent with the facts, the Chinese Foreign Ministry said on Monday.

“The Chinese side has consistently abided by international law and the laws of the host country, and is committed to safeguarding regional security and stability,” Foreign Ministry spokesperson Lu Kang said at the routine press conference on Monday.

Lu’s remarks came after the director of intelligence of the US Africa Command Rear Admiral Heidi Berg told a group of Africa-based journalists that the Chinese military is “guilty” of “irresponsible actions” toward US forces stationed in Djibouti’s Camp Lemonnier, which is located near the Chinese People’s Liberation Army (PLA) base in Djibouti, the Washington Times reported on Sunday.

Zhang Junshe, a senior research fellow at the PLA Naval Military Studies Research Institute, told the Global Times on Monday that, according to the US media report, it was the US warplanes that flew over the PLA Support Base in Djibouti, attempting to gather military intelligence, which seriously threatened the security of the Chinese base and personnel.

It is the US who should reflect on what it did and stop this act that violates the international law, Zhang said.

It is not the first time the US has accused China of pointing lasers at US military aircraft, and China’s Ministry of National Defense refuted the allegation in May 2018, saying it was in “complete contradiction with the facts.”