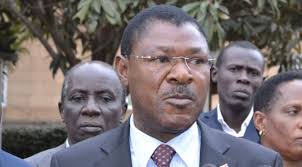 Ford Kenya leader Moses Wetang’ula has reiterated his call for Kenyan Defence Forces troops to be recalled from Somalia.

Addressing the press in his office on Tuesday, Wetang’ula said Kenya’s mission was stabilising Somalia through the creation of Juba land buffer zone, which was contested by both state and non-state actors.

The Bungoma Senator was the Foreign Affairs minister when Kenyan soldiers were deployed to Somalia.

“Somalia sees Kenya as a source of occupation and, therefore, there is need to take a more sober means of addressing the security issues in the region,” he said.

Wetang’ula expressed fears over the trend of terror attacks in Kenya and called for a change of tact in fighting terrorism.

“What is worrying is that the attackers are our own youngsters that have been converted,” he said.