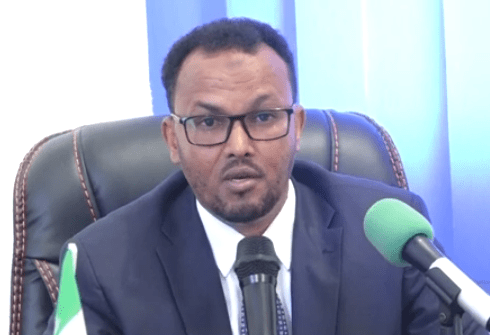 Hargeisa—Deputy of information and national guidance minister Mr Abdulnaser Omar Jama has stated that Waddani is not doing deep and comprehensive assessment regarding their lost in last election and most likely they would lose 160k vote margin in the upcoming presidential election. On the other hand, In his press conference in Hargeisa, the Minster foresees that the tribal gathering in Burao would only yield seismic negative consequences.
Firstly, the minster has raised the issue of clan-based convocation declared by some tradition leaders in Burao. He said since Burao is in perfect condition at moment in every aspects and there is no active tribal hostility currently in the region which would needs meetings to put it down, it’s absolutely unnecessary to orchestrate such nonstarter gathering.
The only situation that needs attention at present is Eel-Afweyn standoff which two brotherly clans who belongs the two sides who’re in involving this gathering have been fighting that area for pasture and water control. Therefore, if these traditional leaders want highlight a imperative matter, they should put all their energy to appease such unfortunate reoccurring clashes.
The honorable minster added that aiding the apprehension of culprits in both Gar’adag incident, which two police officers were killed, and Eel-Afwayn confrontations is commendable role that these traditional leaders should take.
The minster quoted the wisdom of a late wise man named Adan Jama Awke, a well known business man, who used to say ” Rural hostilities shouldn’t be transfer into urban cities”. The minister he believe the main objective of organizing such needless tribal conventions is to move Eel-Afwayn hostility into Burao
Minister Abdulnaser also responded criticisms addressed by Wadani secretary general. The secretary criticized Somaliland president that he has appointed incompetent ministers and deputy ministers in the ministerial positions. Responding to these censures, the minster emphatically pointed out that the president actually nominated ministries who’re determined to unite the community after 2017 divisive election. Moreover, Those ministers are also well aware of the situations that the country has gone through over the years, Thus, the secretary’s criticisms were baseless and embarrassing to his own party.
We all well remembered the enmity and trauma that last election has left the minds of Somaliland people and It is also common that parties have different magnitude of die hard supporters in the regions. For this reason, I would like to advise Waddani party to reassess the reasons they got defeated drastically in certain regions, but to just focus particular areas namely eastern Burao and some parts of Sanaag and Sool regions because you thinking your opponent clinched the victory with help of inhabitants of these areas is certainly not wise strategy. Furthermore, because Mr Abdulrahman Irro, the chairman of Waddani party, believes he should have sent the Former president Silanyo behind bars and replace Mr Sulieman Gaal, the chairman of house of elders, to Sheik Adan Siiro, I don’t think this party evaluating themselves in honest manner. As result, Let alone the 80k, vote difference that Waddani party lost the election last year, in this imminent presidential election it is pretty much they would lost 160 k vote margin.