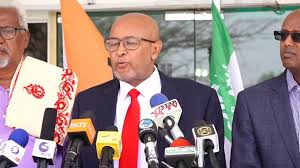 Wadani party chair has called on the government to end the parliament and local council election constraints by means of negotiations. Mr. Abdirahman Mohamed Abdilahi aka “Irro” made the remarks after he posted the statement on his twitter account. The responsibility of holding the upcoming local council and parliament polls really lies on the shoulders of incumbent Somaliland president, Musa Bihi Abdi, said in his statement. Mr. Irro further added that if election are about to be held tomorrow, Wadani party is ready to contest. He reiterated that the formation of new national election commission as being the first election row should be resolved by the negotiation table.