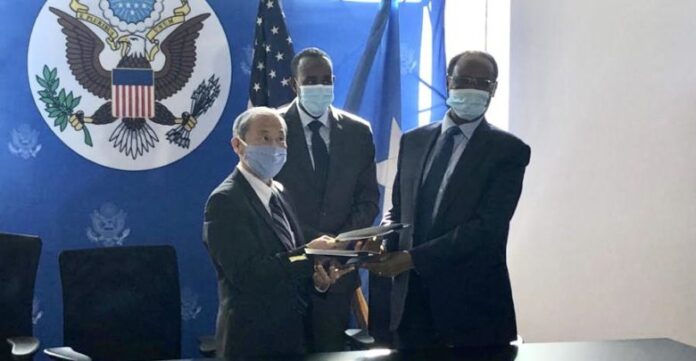 The debt restructuring and reduction pact signed in Mogadishu Sunday envisages cancellation of $1billion in about three years when Somalia completes the debt relief process.

Somalia will have $1 billion dollars owed to the US cancelled in about three year’s time following an agreement signed in Mogadishu Sunday.

Finance Minister Abdirahman Beileh said the agreement followed a go-ahead from the Paris Club which mandated Somalia to negotiate with individual members for debt relief.
“We had a common understanding with the Paris Club during a meeting on 31st March,” said Beileh. “Now we have to negotiate country by country and this is one of the steps we have to take.”
A statement from the US embassy noted the restructuring and reduction deal will lead to ultimate cancellation of the $1 billion when the country completes the stages under the Heavily Indebted Poor Countries (HIPC) initiative.
“ When Somalia reaches the final stage, “Completion Point,” the United States will have forgiven more than $1 billion in debt.”
The embassy noted the agreement was a product of reforms by Somali Government and its reaching of the Decision Point under the HIPC initiative.
Under the initiative, the time between the Decision Point and Completion Point is about three years meaning the US will formally cancel  the whole debt by 2024.
The World Bank, African Development Bank and IMF cancelled all debts owed by Somalia by March enabling the country reach the Decision Point.
Somalia will now move forward with other Paris Club creditors to negotiate debt cancellation. Other creditors are countries outside the Paris Club whose mercy for cancellation Somalia will also be seeking.