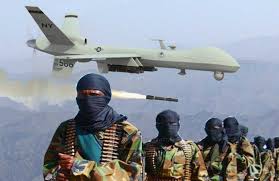 US forces killed three Shabaab terrorists in an airstrike on Monday. The strike occurred 40 km southwest of Somalia’s capital Mogadishu, according to a US Forces Africa Command (AFRICOM) press release today.

The United States is on track to meet or exceed last year’s record number of strikes in Somalia. AFRICOM has conducted 21 strikes against Shabaab in Somalia so far this year, Maj. Karl J. Wiest confirmed to FDD’s Long War Journal on behalf of the Command’s Media Relations.

This year’s strikes against Shabaab are, however, more geographically dispersed, demonstrating the group’s continued resilience and concerning geographic scope. For example, in June the US conductedtwo strikes against Shabaab in the vicinity of Bosasso, the northernmost strikes ever against the al Qaeda affiliate in Somalia. This month, strikes resumed in the south, particularly areas outside the capital, a frequent target of Shabaab attacks.

The 2017 air campaign against Shabaab was concentrated entirely in southern Somalia, especially in Jilib and its surroundings, a known safe haven for al Qaeda’s East Africa network. According to the US State Department’s Country Reports on Terrorism for 2016, Shabaab maintains a safe haven in the Jubba River Valley, and controls “several villages and towns throughout Jubaland region, including Janaale, Jilib, and Kunyo Barow.”

Unlike last year, the US has not conducted any strikes against the Islamic State’s network in Somalia in 2018, although Maj. Wiest mentioned continued operations against it. “U.S. forces in cooperation with the government of Somalia, are conducting ongoing counterterrorism operations against al-Shabaab and ISIS-Somalia to degrade the groups’ ability to recruit, train, and plot terror attacks in Somalia and the region.”

“U.S. forces will continue to use all authorized and appropriate measures to protect U.S. citizens and to disable terrorist threats,” AFRICOM’s press release said. “This includes partnering with AMISOM and Somali National Security Forces (SNSF) in combined counterterrorism operations and targeting terrorists, their training camps, and their safe havens throughout Somalia and the region.”