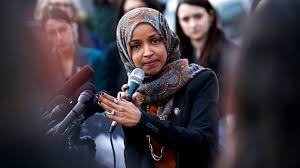 Democrats in the U.S. House of Representatives are struggling to decide how or whether to rebuke a new Democratic lawmaker, a Somali-American Muslim who has criticized Israel in ways that many find offensive.

The House could vote Thursday on a resolution that condemns both Islamophobia and anti-Semitism, a statement that at first was clearly aimed at Congresswoman Ilhan Omar, one of two Muslim women who were elected to the 435-member House last November and took office in early January, but does not name her.

But the debate over the resolution about the 37-year-old lawmaker from the midwestern state of Minnesota has evolved into questions into over whether the statement was needed at all, whether she as a Muslim, a distinct religious minority in the U.S., was being unfairly singled out or whether her remarks about Israel needed to be disavowed since the House had already recently adopted a statement condemning anti-Semitism.

Omar has incensed many fellow Democrats for her comments calling into question long-held U.S. support for the Jewish state that has been a bedrock belief of Republican and Democratic lawmakers alike since the country’s inception in 1948. Numerous Democrats, with a few exceptions, say her comments are anti-Semitic and have condemned them as well beyond the realm of normal political debate in the U.S.

While the majority Democrats in the House struggled to offer a response to the controversy, President Donald Trump chided them.

“It is shameful that House Democrats won’t take a stronger stand against Anti-Semitism in their conference,” Trump said Wednesday on Twitter. “Anti-Semitism has fueled atrocities throughout history and it’s inconceivable they will not act to condemn it!”

Omar set off the discussion last weekend by referring to pro-Israel advocates in the U.S. as supporting “allegiance to a foreign country.” Omar previously had drawn the ire of top Democratic lawmakers and Republicans for questioning the financial clout of the American Israel Public Affairs Committee, a highly influential lobby in the U.S. supporting Israel.

“It’s all about the Benjamins baby,” Omar tweeted, referring to pictures of Benjamin Franklin, a U.S. Founding Father whose picture is on $100 bills. She apologized and joined in voting for an earlier resolution condemning anti-Semitism.

AIPAC does not make campaign contributions to U.S. lawmakers, but many of its members individually do.

In one version of the resolution rebuking her said the “myth of dual loyalty … has been used to marginalize and persecute the Jewish people for centuries for being a stateless people.”

The statement said that “accusing Jews of dual loyalty because they support Israel, whether out of a religious connection, a commitment to Jewish self-determination after millennia of persecution, or an appreciation for shared values and interests, suggests that Jews cannot be patriotic Americans and trusted neighbors, when Jews have served our nation since its founding, whether in public life or military service.”

Citing past hate attacks on Jews in the U.S., including last October’s killing of 11 Jews inside a synagogue in Pittsburgh, the resolution said the House “recognizes the dangerous consequences of perpetuating anti-Semitic stereotypes and rejects anti-Semitism as hateful expressions of intolerance that are contradictory to the values that define the people of the United States.”

Nearly a dozen pro-Israel groups called for House Speaker Nancy Pelosi to oust Omar from membership on the House Foreign Affairs Committee, but top Democrats in the House leadership have stopped short of that action.

Jonathan Greenblatt, the chief executive of the Anti-Defamation League, called on the House to reject what it said was Omar’s “latest slur.”

“No member of Congress is asked to swear allegiance to another country,” Lowey said. “Throughout history, Jews have been accused of dual loyalty, leading to discrimination and violence, which is why these accusations are so hurtful.”

Omar replied, “Our democracy is built on debate, Congresswoman! I have not mischaracterized our relationship with Israel, I have questioned it and that has been clear from my end.”

Not all Democrats have condemned Omar’s comments, with at least two other new House lawmakers, progressive Democrats Rashida Tlaib of Michigan, the first Palestinian-American congresswoman, and New York’s Alexandria Ocasio-Cortez, coming to her defense.

Others questioned why Omar should be singled out when Trump refused initially to condemn anti-Semitic hate speech at a 2017 white nationalists’ rally in Virginia, saying there “fine people” on both sides.

Tlaib said Omar had been “targeted just like many civil rights icons before us who spoke out about oppressive policies.”

But as the resolution was being debated among the Democratic majority in the House, language was added to also condemn anti-Muslim bias.

One Democratic leader, Congressman Steny Hoyer, said, “The sentiment is that it ought to be broad-based. What we’re against is hate, prejudice, bigotry, white supremacy, Islamophobia and anti-Semitism.”