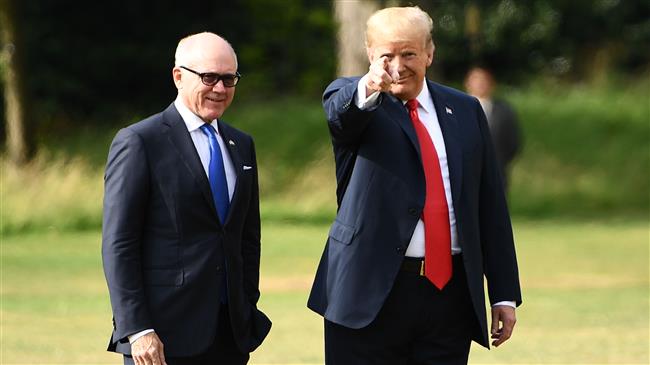 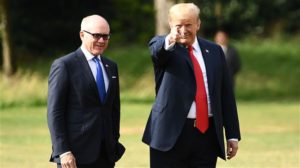 US Ambassador to Britain Woody Johnson has urged the UK to drop out of the 2015 Iran nuclear deal and follow the lead of President Donald Trump who left the “flawed” agreement in May.

Trump announced on May 8 that he would abandon the Joint Comprehensive Plan of Action (JCPOA), a landmark nuclear deal between Iran and six world powers – the US, the UK, France, Russia, China and Germany.

The move did not go down well with the other signatories, who have made it clear that they would stay in.

In an article for The Sunday Telegraph, the American envoy called on the government of British Prime Minister Theresa May to reconsider its support for the nuclear deal and side with Washington.

“America is turning up the pressure and we want the UK by our side. It is time to move on from the flawed 2015 deal,” he said.

“We are asking global Britain to use its considerable diplomatic power and influence and join us as we lead a concerted global effort towards a genuinely comprehensive agreement.”

Britain’s ambassador to the US says “as long as Iran is in compliance with the deal and wants to stick with it that will be our position as well.”

Under the JCPOA, Iran agreed to limit parts of its peaceful nuclear program in exchange for the removal of all nuclear-related sanctions.

On Monday, Trump ordered all nuclear-related sanctions that were removed under the deal to be reinstated immediately.

The first phase of the unilateral sanctions came into effect on Tuesday, targeting Iran’s purchase of US dollars, trade in gold and other precious metals as well as its automotive sector.

A second batch of bans will be re-imposed in November with the aim of curtailing Iran’s oil exports and shipping sectors.

Johnson wrote in his article that British businesses should cut all trade ties with Iran and help the US form a “united front.”

“The President has been explicit: any businesses which put their own commercial interests in Iran ahead of the global good will risk serious consequences for their trade with the United States,” he said.

PressTV-Germany: US can’t tell us with whom to do business

Germany’s economy minister says the US is in no position to tell Berlin with which countries it can do business.

Joining Russia and China, who have thrown their full weight behind the accord, Britain, France and Germany said in a joint statement last week that they “deeply regret” the re-imposition of US sanctions because the Iran deal was “working and delivering on its goal.”

The European Union has tried to counteract the effects of the unilateral US sanctions by launching an updated version of its “Blocking Statue,” a measure that seeks to protect European companies doing business in Iran from punitive US measures.