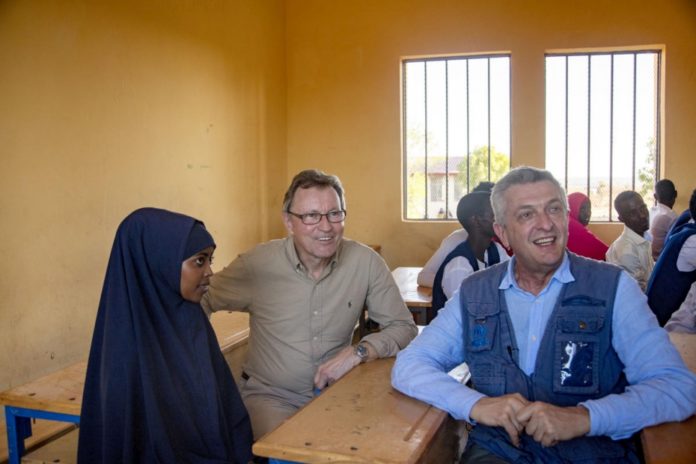 Filippo Grandi visits groundbreaking projects that improve the lives of refugees and their host communities.

ADDIS ABABA, Ethiopia –  On his four-day visit to Ethiopia, UN High Commissioner for Refugees Filippo Grandi praised the country’s generosity towards hosting refugees, as well as the government’s openness to new and innovative approaches to improve the lives of the more than 900,000 refugees and the communities hosting them.

The High Commissioner spent two days in Melkadida, a region bordering Somalia, which hosts over 200,000 refugees. He saw first hand how a US$100 million investment by the IKEA Foundation over the last seven years has transformed the semi-arid, isolated area into a thriving community.

Grandi visited projects funded by the Foundation, including an irrigation scheme where 1,000 hectares of previously barren land are now lush farms that enable refugees grow crops such as watermelon, tomatoes and corn up to three times a year.

He also visited markets supported by microfinance and other economic empowerment programmes, where refugees and the local community buy and sell their crops. The programme has been so successful that some of the crops are being exported to other regions in the country. Refugees told the High Commissioner that they are saving some of their income to improve the markets themselves.

“What has developed here is a unique approach to self-reliance of refugees where the government of Ethiopia has been extremely open to new approaches,” said Grandi. “The host communities and refugees have also been remarkably open to work together in harmony. This is something we don’t normally see.”

At a meeting with community leaders in Dollo Ado, the High Commissioner and IKEA Foundation CEO Per Heggenes heard about how the investment has had a positive impact on the entire community. They also announced that the Foundation has decided to extend their investment in the project for at least three more years to ensure the community can sustain it independently.

Heggenes, who noted that the area was in a dire situation when the project began, calls the progress he has witnessed “a dream come true.” He said its legacy is as much about helping foster harmony between the refugees and the local Ethiopians, as it is about growing the economy.

“What always happens when large numbers of refugees descend on a small community is it creates conflicts, because everyone wants to have the firewood, everyone wants to have the grazing land for their goats,” said Heggenes. “We approached this in a way to say we’re going to help the refugees and the host community come together, farm the land together, share the crops and live as sisters and brothers.”

At the Melkadida Camp, the High Commissioner visited another project that the IKEA Foundation invested in – a secondary school, where refugee and host community students have access to quality teachers, well-equipped classrooms and a supportive learning environment.

For those that graduate, there is an opportunity to attend a new teacher’s college in Melkadida, also thanks to IKEA Foundation funding, with the goal of giving young people the opportunity to become professionally qualified teachers and to help shape the next generation of students in the region.

One of those students, 19-year-old Fartun who is in her last year of secondary school and hopes to attend university to study medicine, told the High Commissioner and Heggeness that she hopes the rest of Ethiopia can learn from how education can be a crucial tool to bring peace and harmony between communities.

While in Ethiopia, the High Commissioner also attended the 32nd African Union (AU) Summit in Addis Ababa on 9-10 February, where the organization declared the annual theme for 2019 as the “Year of Refugees, Returnees and Internally Displaced Persons (IDPs): Towards Durable Solutions to Forced Displacement in Africa.”

Grandi took part in high-level discussions on addressing the root causes of Africa’s displacement, which was co-organized by UNHCR, the UN Refugee Agency. Participants noted that eliminating numerous and complex reasons for displacement – including issues such as armed conflict, terrorism, lack of good governance, the absence of rule of law and respect for human rights, corruption, economic inequality and inequality in resource distribution – is the most effective way to achieve solutions.

The High Commissioner remarked on the large numbers of refugees living in protracted situations due to unresolved conflicts, but also on the generosity of African countries and people.

“I have been in the most remote villages of this continent where sharing the little food, water and shelter that people have with foreigners that are in distress because they had to flee, is not like in other richer parts of the world. It’s not the subject of political negotiations but is a natural instinct rooted in the absolute values of a tradition of a culture and of a society,” Grandi said in an interview.

“This solidarity is there. People have it naturally. But we should not take it for granted. It is important that we share this solidarity.”

Throughout his visit, the High Commissioner spoke about the importance of the Global Compact on Refugees, adopted by the UN General Assembly last December, which calls for more inclusion of refugees in communities where they reside and more global support for countries like Ethiopia, who continue to welcome and host them.

“This the first year we’re going to implement the Global Compact on Refugees,“ Grandi said. “But I tell people we’re already implementing it here in Melkadida, with multiple partners and development partners from programmes in irrigation, vocation, educational training.”

While in Addis, the High Commissioner also met with President Sahle-Work Zewde, as well as Ato Kebede, the Director General of the government’s refugee agency ARRA, where he praised Ethiopia’s new refugee law as forward-looking and representing the principles of the Global Compact on Refugees.

Addressing the media following his meeting with the President, Grandi said “the proclamation is one of the best refugee laws, not only in Africa, but in the world,” and pledged to mobilize more resources for development, “not just for refugees, but also for their hosts.”