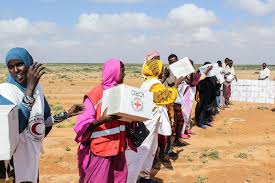 MOGADISHU, Somalia–With famine looming large, due to worst harvest season since 2011 in Somalia, the UN Relief Chief Mark Lowcock on Friday, downplayed its effects on the food security.

He said due to timely intervention, fewer Somalis would now go hungry, against earlier predictions.

“The latest food security analysis for Somalia shows that our response is working. One million fewer Somalis are hungry today than had been projected, because we acted early, “the UN official said in a tweet.

Lowcock said the aid workers were able to delivery timely, to reverse the catastrophe.

He visited Somalia on Thursday to take stock of relief operations.

Cropping season in Somalia this year is the worst since 2011, because of poor and erratic rains, followed by flooding at the end of the rainy season, according to the UN.

Earlier the UN had predicted that by September, 2.2 million people will face hunger and another 3.2 million people – around one-fifth of Somalia’s population – will be uncertain of their next meal due to famine.