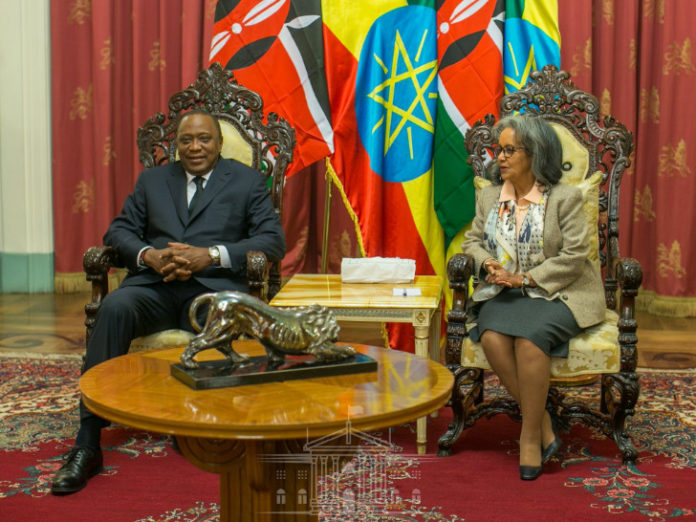 According to Ethiopian Embassy in Nairobi, president Zewde will be in Kenya on Tuesday for a one day official working visit.

“The main purpose of HE President Sahle-Work’s visit to Kenya is to deliberate on ways of further strengthening bilateral ties and cooperating on regional issues of common interest with the President of the Republic of Kenya HE Uhuru Kenyatta,” read a statement from the Embassy.

Insiders, however, said that the visit might have been provoked by claims that Ethiopia is seeking partnership with Somalia as it turns its back on Kenya.

Another contentious issue has been the border clashes between the neighbouring communities.

This comes amid speculations that President Uhuru Kenyatta has gone ‘missing’.

Uhuru has not been seen in the public eye for two weeks since he departed the country for China to secure various trade deals.

Apart from securing an avocado deal with the Chinese, Uhuru witnessed the signing of two project delivery agreements totalling to Sh67.5 billion through concessional financing and Public Private Partnership (PPP).

President Zewde’s visit is said to be a deliberate move to amend ties between the two countries.

Last Month Ethiopia through its Ambassador to Nairobi Meles Tikea denied claims it is turning its back on Kenya.

Ambassador Tikea said Ethiopia’s decision to seek partnerships with other neighbours to have more access to the sea does not imply Kenya was being thrown under the bus.

He said  Ethiopia is not seeking to compete with Kenya on any front and will remain a strategic partner.