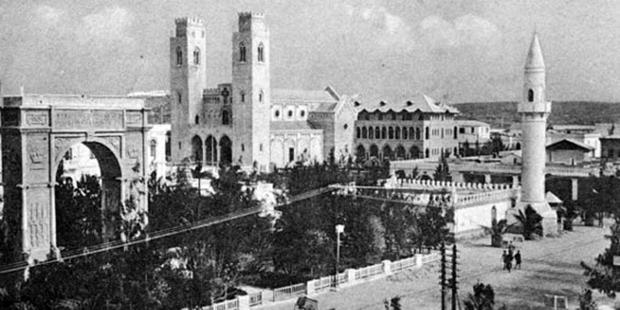 Mogadishu’s first bishop was also its (so far) last, as the Somali capital has endured decades of chaos. We remember his death 30 years on …

When Mogadishu Cathedral opened in 1928, it was the largest cathedral in Africa. Built in three years and designed in a Norman Gothic style by architect Antonio Vandone di Cortemilia, the church was heavily influenced by the Cefalù Cathedral in Sicily.With twin stone towers reaching a height of more than 37 meters (121 ft.), this church was for many years the tallest structural point in the Somali capital. It was also a cultural landmark and cornerstone in the lives of Mogadishu’s Catholic inhabitants, of which there were some 8,500 at the mid-point of the 20th century.

Though a portion of this number consisted of native Africans (such as Catholic converts from the Bantu ethnic group), the overwhelming majority were Catholics of Italian descent (Somalia was once the Italian colony of Somaliland).

By the time Mogadishu was elevated to a diocese on November 20, 1975, the Catholic population was already in steep decline. Though the city still had its scenic charms, safety had become a concern. One vivid 1975 example involved a French ambassador, who was kidnapped by four armed men as he exited a Sunday church service at Mogadishu Cathedral.

Almost exactly one year after this kidnapping incident, Salvatore Colombo – who was born in northern Italy’s Lombardy region on October 28, 1922 – was ordained as the diocese’s first bishop. To date, he is also the diocese’s last bishop.

On July 9, 1989, Bishop Colombo, then age 66, was gunned down while saying Mass inside Mogadishu Cathedral. This violence ended his 13-year tenure as a bishop and 43-year tenure as a priest, most of which he had spent in Somalia. After his burial in Mogadishu, someone dug up his remains and extracted his teeth for their gold fillings. His remains were later relocated to Milan, Italy.

Colombo’s murder has remained unsolved, and the Church has decided not to appoint a successor. It’s simply too dangerous. Even at the time of the bishop’s assassination, the nation was heading into a violent chaos from which it has yet to fully recover.

In early 1991, the cathedral was looted and set ablaze. Right around that time, the U.S. embassy in Mogadishu, which had received bazooka fire, was evacuated. One week later, the Italian embassy – the last remaining one in the city – also evacuated. In short order, telephone links were severed, as a once-vibrant capital city separated itself from the outside world and descended into a dark age of self-destruction.

Amid a shortage of electricity, food and running water, civilians who remained in the city had to scramble to buy weapons in the street in order to defend themselves. Competing for power were various militias, often divided among longstanding clan affiliations and rivalries. Eventually adding to the general mayhem was the rise of militant extremist groups, such as Al-Shabaab.

Now there are only a few dozen Catholics in Somalia, where any Christian worship is typically conducted in secret. Instead of a bishop, Somalia has an apostolic administrator, Giorgio Bertin, who also serves as the bishop of the only diocese of Djibouti (a small nation that borders Somalia).

In recent time, the grounds of the Mogadishu Cathedral have been used as a makeshift home for displaced people, many of them refugees from famine-stricken regions in the countryside. Of course, just because a place serves as a refuge doesn’t necessarily mean it is safe. As one journalist described, “If you wander around there, sooner or later you get pinned down in a firefight between militias.”

One intrepid tourist who (escorted by Kalashnikov-wielding private security guards) visited the church in December 2014 described a “vaguely recognizable” altar and the remnants of a depiction of St. Francis of Assisi. The saint, however, has suffered decapitation, an apparent casualty of Somali target practice.

There has been some mention of a desire to rebuild this fallen cathedral. The situation in the surrounding area, of course, would need to improve.