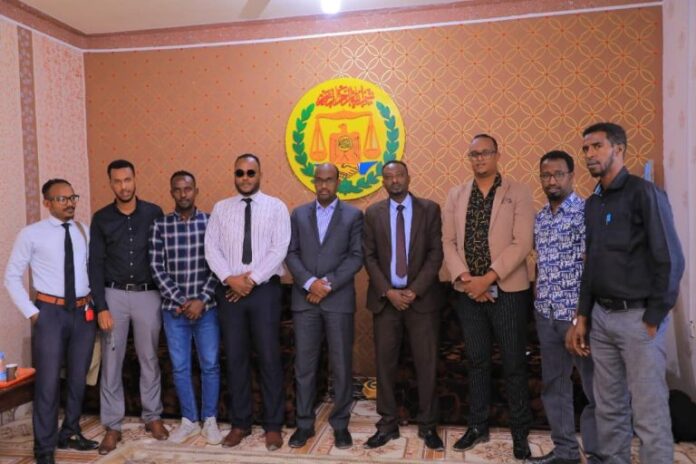 HARGEISA–Telecommunication and Technology Minister , Hon. Abdiweli Sheikh Abdilahi Sufi, on Tuesday met with members of Somaliland Online Media Associations, chaired by Mustafe Janale. During the meeting, several important issues including the strengthening of working collaboration between Online Media Association and the ministry were discussed. The minister has said that the ministry is currently working on the creation of new ethical law that the SOMA will comply with once it is completed. Mr. Sufi has promised that members of SOMA will be given a role in the creation of the new ethical law. In addition, the minister has admitted the crucial role that Online Media play when it comes to the socio-economic development of the nation. Meanwhile, the minister has reiterated that the ministry will boost the working cooperation with Online Media Association. He also pledged to upgrade the knowledge of practicing journalists currently working for Online media as they are the most influential ones at this technology driven world. After the meeting, Janale has thanked the minister for acknowledging the role that online media play in the country’s progress. The chair of SOMA reiterated to have a good rapport with the ministry. He also underscored that the association which represents all online media will benefit for the development of all online media staffers. The two sides have reached a common understanding of the important issues that have been discussed during the meeting.