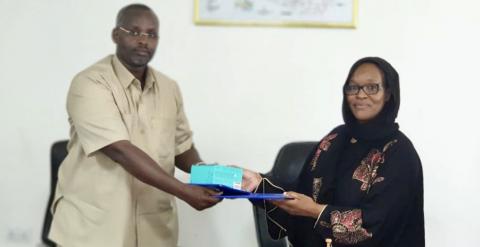 Hargeisa, Somaliland – Migrant returnees in Somaliland now stand a better chance of accessing critical services, thanks to the creation of a database application for the registration of returning migrants and the issuance of registration certificates.

In the Horn of Africa, Somalis account for the largest migrant population after Ethiopians. They move both intra-regionally and out of the region, particularly towards the Arabian Peninsula and Europe. Many also opt to return, often approaching IOM when they get stranded in places like war-torn Libya.

However, like elsewhere, returning migrants often lack valid documents, having had them lost or confiscated during their migratory journey. Without such enabling documents, which may include national registration certificates, basic support services provided by the government can be out of reach.

The new database, jointly developed between IOM and the Somaliland’s National Displacement and Refugee Agency (NDRA), intends to enhance the capacity for response in this area. Following a capacity assessment that took place in February 2019, IOM internally developed the application which was launched in June.

Last week (11 July) IOM donated three high-resolution webcams to NDRA that will be used to take photos of the returning migrants upon registration. Presiding over the ceremony was NDRA chairman Abdulkariim Ahmed Mohamed and IOM’s Head of the Hargeisa Sub-Office Sikhulile Dhlamini, who both welcomed the collaboration between the two agencies.

According to Mohamed: “NDRA now has a registration system that will collect pertinent information from returnees, which is a result of the technical expertise provided by IOM following a request made by NDRA in February 2019.” He added: “We also appreciate that IOM spent time building the capacity of NDRA staff to enable them to use the database software effectively.”

Funding for the database’s development was provided by the EU-IOM Joint Initiative for Migrant Protection and Reintegration in the Horn of Africa, which also supports migrants’ voluntary return and reintegration. It is backed by the EU Trust Fund, which covers and has been set up in close cooperation with a total of 26 African countries.

The programme facilitates orderly, safe, regular and responsible migration management through the development of rights-based and development-focused procedures and processes on protection and sustainable reintegration.

Since the launch of the EU-IOM Joint Initiative in early 2017, some 288 migrants have safely returned to Hargeisa and the surrounding areas in Somaliland. The new database will support the capture of information upon registration, including migration history, education and skills.

The system will also provide case management functionalities that in the long run will allow for the tracking of services provided to the registered individuals as well as the possibility of generating a ‘Returnee Registration Certificate’ and extracting reports to analyze trends and common experiences of returning migrants.

NDRA also plans to deploy the application at its office in Berbera – the biggest port of entry for sea arrivals – where a higher number of registrations are anticipated per month than in Hargeisa.

Dhlamini said IOM recognizes the importance of data collection in informing understanding of the ever-changing migration flows. “This important step forward, marking our valued partnership with NDRA, means that stakeholders will have accurate information to respond to the most vulnerable,” she said, adding: “The database is a key milestone in ensuring that  returnees to Somaliland are properly registered, which ultimately leads to access to services and enjoyment of rights.” 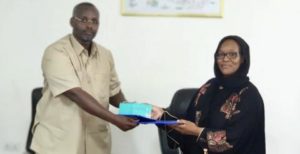