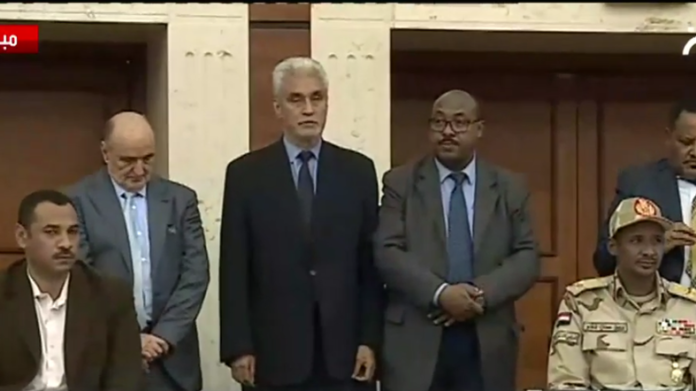 At a press conference on Wednesday, it was announced that the constitution draft will be discussed this Friday.

The first phase of a political agreement was signed by Sudan’s Transitional Military Council and the Forces of Freedom and Change opposition alliance with the attendance of the African Union and Ethiopian envoys.

At a press conference on Wednesday, it was announced that the constitution draft will be discussed this Friday.

The deputy head of Sudan’s Transitional Military Council, General Mohamed Hamdan Dagalo, said that the agreement is “a historic moment,” and makes way for “a new era of cooperation.”

The African Union envoy said the agreement marks a “new era” and “paves the way for the next stage.”

For his part, the Ethiopian envoy said that the “people of Sudan deserve this great day.”

The Forces of Freedom and Change opposition alliance said: “We must stay away from all that divides the Sudanese people.”

A sovereignty council composed of 11 members – five of whom represent the Transitional Military Council, five from the Forces of Freedom and Change, and one a civilian – oversaw the writing of the agreement.

According to the agreement, any person who holds any official position during the transitional period may not stand for election.

A Council of Ministers, which will be made up of 20 members, will also be nominated by the Forces of Freedom and Change.

The agreement also demands the removal of Sudan’s name from the US State Department’s list of state sponsors of terrorism and calls on the international community to support the transitional authorities.

It also stipulates that members of the sovereignty council representing the Transitional Military Council will get to choose the interior and defense ministers.

The agreement will also address the economic crisis and legal reforms, and aims to work towards achieving sustainable economic development.

It also stipulates the completion of the peace process within a period of six months.