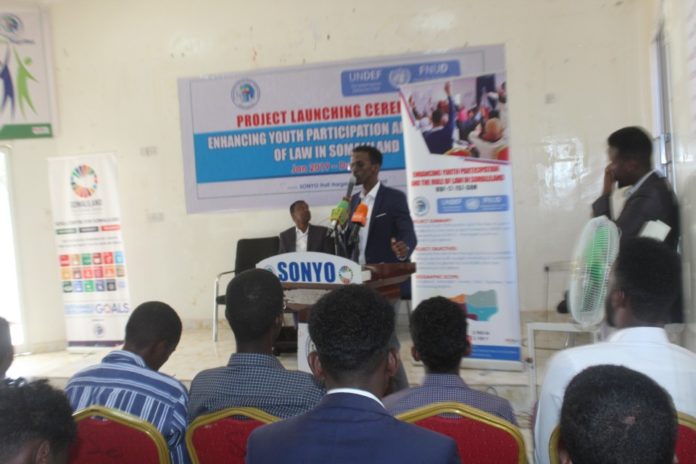 Somaliland National Youth Organization, (SONYO Umbrella) launched in a well-attended and colorful ceremony a new project at its headquarter. ‘Enhancing Youth Participation and the Rule of Law in Somaliland’is a new two-year project funded by the United Nations Democracy Fund (UNDEF), and implemented by SONYO, in collaboration with its SONYO member organizations, government, youth, and other development stakeholders.

The project aims to strengthen the capacities of youth CSOs to adeptly promote the rule of law through social accountability methods. The scope of the project covers all the six regions of Somaliland –Marodijeh, Awdal, Sahil, Togdheer, Sool and Sanaag regions. The project targets about six thousand (6,000) beneficiaries either directly and indirectly. Through the project, six regional Social Accountability Youth CSO Forums (SAYCOFs) will be established, which will mobilize youth and conduct education and awareness activities on youth participation in social accountability of public projects, processes that will be expected to enhance civic action and collaboration between Youth CSOs and the government for promotion of open accountable governance. In addition to youth participation in the promotion of open governance of public resources, the project will seek to integrate Action Plans on social accountability in the implementation of selected national policy frameworks promoting youth development.

Mr. Omer Miigane, SONYO Director, first thanked Hon. Boos, the Minister of Youth and Sports (MoYS) and then presented about the project. ‘Enhancing Youth Participation and the Rule of Law in Somaliland’is a new two-year project funded by the United Nations Democracy Fund (UNDEF), and implemented by SONYO, in collaboration with its SONYO member organizations, government, youth and other development stakeholders” Said by Mr. Omer Miigane – SONYO Director. He added that SONYO remains a vibrant and resourceful platform, where youth can learn, grow and advocate youth agendas.

Mr. Abdulaziz Saeed Salah, SONYO Chairperson, expressed his gratitude to the Hon. Minister Boos, SONYO secretariat for putting together a successful proposal to UNDEF and other participants from universities, youth organizations and other stakeholders at the event. “SONYO, which constitutes over fifty youth organizations, is the largest youth-run network across the country working for youth empowerment” Said by Mr. Abdulaziz S. Salah, SONYO Chairperson. It is understandable that youth faces many challenges; however, we are working establishing the Youth Development Fund. “We are launching this project to know about the project and start accountability here at SONYO. This project aims to enable youth to raise their rights to the government” Concluded by Mr. Abdulaziz – SONYO Chairperson.

During the launch, Hon. Boos M. Mohamed, who is Minister of Youth and Sports (MOYS), lauded SONYO for coming up with such an initiative that increases youth participation who constitutes over 70% of the country’s population. “Our youth are our future. We need to invest them to participate in country’s governance and accountability of resources.” Said by Hon. Boos, the Minister of Youth and Sports (MOYS). He noted that the development trajectory of Somaliland, which was focusing on the stabilization of peace, democratic consolidation, and economic growth required greater, meaningful and wider participation of all citizens of the country.

“This project is spot-on in this regard, since it will contribute greatly in enabling the youth to meaningfully become active citizens for a more peaceful, democratic and prosperous Somaliland” added by Hon. Boos.

At the end, Hon. Boos thanked UNDEF for their financial support to the project andgave his assurance that the Government of Somaliland, through his ministry will provide full support to ensure its implementation, success and possibilities to replicate in other areas in Somaliland.