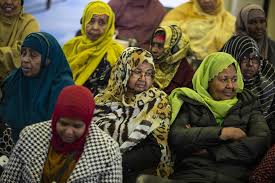 Local immigrant groups joined forces Saturday to discuss ways to combat racism in the aftermath of last month’s massacre of 50 people at mosques in New Zealand.

Meeting in Putnam Chapel at the First Church in Roxbury, several local leaders and members of the Somali community promised to stand together against Islamophobia.

“Whether it be comments in the streets or more of a systemic issue, it’s hard to ignore the realities of black and brown folks,” said Nasteho Ali, civic engagement coordinator for African Community Economic Development of New England.

Ali’s group organized the summit along with the Center to Support Immigrant Organizing.

The meeting was focused on Somali efforts because Somalis are the largest faction of Muslims in Boston, the organizers say.

“In the ’90s, there was a large population of [Somali] refugees coming to escape civil war,” Ali said. She said the community economic development group helped resettle refugees.

Ali said she now teaches teenagers how to be better leaders and understand the issues they may face growing up as immigrants.

Kevin Whalen, codirector of the immigrant organizing group, said, “Islamophobia and xenophobia affect all immigrants and people of color.”

“I may not necessarily know all the pain and struggle the Muslim community goes through,” said Patricia Sobalvarro, a Guatemalan immigrant. “[But] I feel as an immigrant woman myself it is my duty to be here to express my support and say I feel there’s more things we have in common despite the differences we have.”