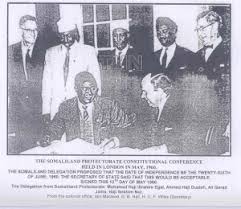 HARGEISA–Ahmed Haji Du’ale known as Ahmed Keyse the last surviving leader of Somaliland’s movement for Independence passed away in Arizona in the United States of America last night.

He was 98 years old and spent last years of his life in Tascon, Arizona. His daughter Khadra Du’ale confirmed the death of her father on a statement on facebook.

Khadra wrote “His passing marks an end of an era for he was the last remaining legend of those who struggled for Somaliland Independence.”

She continued that their family is sustained by the fact that they had led an honorable, respectable and distinguished life and maintained his strong patriotic and unwavering principles to the end of his life.

Ahmed Keyse was among the leaders of the Somali National League, the biggest pro independence party in Somaliland in the 1950’s.

He was a member of Somaliland delegation that signed the Independence agreement t with the British government.

He was elected to Somaliland’s first parliament from Burao in the 1960. He became the first minister of agriculture in the Somali republic after the independence a post he resigned following fallout with a stripping of colonizers of their plantations in Somalia.

His last public office was ambassador to West Germany in the 1960’s.