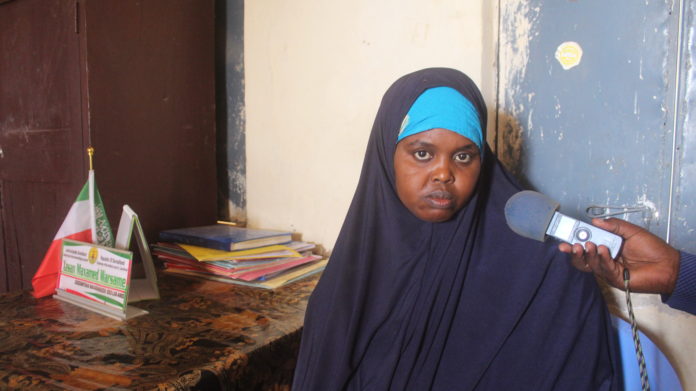 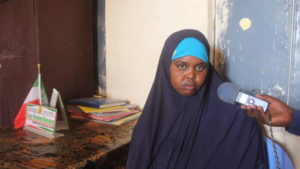 Samira Sheikh Mohamud, who took her khat-chewing husband to court in Lasanod for domestic violence and divorced him/Farah Dubbad/Ergo

An upsurge in divorce cases being brought to court by Somali women against their violent, abusive husbands high on a local narcotic drug is causing concern in the northern Somali town of Lasanod.

According to the director of Lasanod District Court, Judge Hassan Mohamud Warsame, 360 cases of violent assault have been brought before the court this year by local women. Most of them complain that their husbands are not providing a living for the family because they have become users of the popular narcotic leaf Khat that makes them unable to hold down a job.

Samira Sheikh Mohamud sought legal redress from the court when her domestic life became unbearable. She told Radio Ergo that her husband took up regularly chewing khat six months ago and then began violently assaulting and busing her at home.

“He would come home late at night, and he would start beating me up with electrical wires. This happened more than 14 times over the last three months. I have wounds on my chest and right eye,” Samira said.

She said her husband had previously been working on construction sites, but due to the Khat habit he stopped bringing home the financial support needed to feed the family.

The judges looked into Samira’s case over a period of three months, before the court made its final order for the couple to divorce after four years of marriage.

The price of Khat has fallen sharply in recent months in the markets of Lasanod, making it more affordable to those on lower incomes. More men have begun to chew as a result of the lower price and this is widely believed to be the key factor in the high numbers of breakdowns in marital relationships.

Khat users tend to stay up late into the night chewing. One effect of the narcotic is to make people feel extremely chilled out – some describe it as inducing indolence, leading to an inability to earn a living.

According to local businessmen, eight tonnes of Khat have been arriving in Lasanod every day from farmers in neighbouring Kenya. The businessmen say they used to receive around six tonnes daily to sell locally.

Kenya is one of the major sources of Khat, also known as Miraa, grown particularly in the central highlands. The Kenyan growers have been looking for new markets since the leaf was declared illegal and imports banned by the United Kingdom in 2014.  Up to 3,000 tonnes used to be imported into the UK every year, researchers report.

A kilogram of Khat leaf now sells at 250,000 Somali shillings ($7) in Lasanod markets, half the price several months ago.

This new cheap supply has apparently driven a greater demand for Khat among men like Farhiya Adan Ali’s husband.

Farhiya, a mother of eight children, told Radio Ergo that her husband started to chew Khat six months ago and from that time on ceased to play his part in the family. He had been providing for them adequately with the income he earned as a truck driver.

“I suffered constant violence and abuse from my husband for the last four months, while he failed to provide for our living,” Farhiya said. The court ordered the couple to divorce.

The court procedures allow a complainant to present a case before the judges, who then call the accused and any witnesses including relatives of the married couple before the court. The cases take between one and three months for the court to handle. During this time, the judges may offer the married couple a chance to find their own solution to their conflict. However, if no domestic solution is reached, the court makes a ruling with the involvement of the close relatives.

Judge Hassan Mohamed Warsame told Radio Ergo that 90 of the 360 cases this year resulted in divorce.  Another 120 cases resulted in a family solution being found. The other 150 cases are pending in court.

Some of the husbands were also given jail terms.

The judge confirmed that interviews with the women bringing the cases revealed that husbands are being prevented from working because they are chewing Khat. In most of the cases before the court this has led to heated arguments and violence erupting, when the men come back home late at night without any money to support the family.