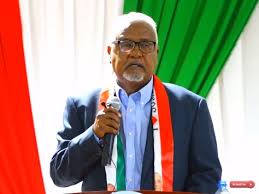 Hargeisa-The acting chair of Waddani, Somaliland’s main opposition party,Representative Abdikadir Jirde, has accused the administration of President Muse Bihi Abdi ” of misleading the United Kingdom envoy, Ambassador Ben Fender, on his recent visit to Somaliland, that there had been an all party agreement regarding the proposed parliamentary seats and division between the regions”.

Acting chair, Abdikader Jirde remarked in a press briefing that no such agreement had been reached between the parties and ” the assertion by the administration that all the stakeholders had agreed to contest the prospective parliamentary elections using the current 82 seat model, is a lie”.

According to the acting Waddani chair, no such meetings had taken place and a consensus was not reached. Waddani has stressed that the recent joint agreement by the two other political parties, Kulmiye and UCID, is an attempt to hijack the political process, circumvent the constitution and to try convince the international partners that a two party election contest can take place in Somaliland.

“This can never and will never happen” stated, Abdilkader Jirde, acting chair of Waddani, in his press briefing, which also included a severe criticism of the trip to Kenya by a delegation from Kulmiye and UCID, ” It is a sales pitch to the donors that a two party elections is possible in Somaliland, and an obvious ploy to sell-out our democratic principles”, concluded, Representative Jirde..