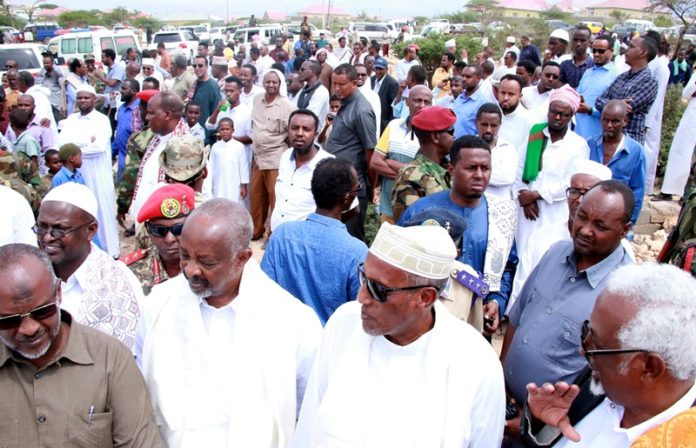 President H.E. Musa Bihi Abdi led a multitude of mourners to accord the late Abdilahi Egge Musa a.k.a Obsi a state burial following his passing away in Hargeisa.

The Head of State eulogized the late Obsi in words that moved many people in the whole country.

He described the deceased as a just, righteous, pragmatic, brave and decisive person in all his aspects and undertakings during his lifetime.

Saying that the late Obsi helped the needy at any time opportunity arose, the President noted that at no known time has he (the deceased) collided with any person.

He said that the personal conduct of the deceased was at every level impeccable.

He pointed out that he was one of the most prominent personalities to have worked endlessly towards national or public objectives.

Of note, the President underscored was the fact that the deceased stood out to fight for justice whenever and wherever deserved.

While the President prayed for the soul of the late Obsi be blessed in heaven, he condoled the family, relatives, and friends of the deceased to have strength at the trying moment following his demise.

Similar eulogies were noted from eminent personalities amongst the mourners, prominently of whom was the former VP Abdirahman Aw Ali who revealed that he was acquainted with the deceased for the past 50 years.

He said that they worked in the same department and were partners in the SNM struggle.

Numerous dignitaries amongst the mourners included several cabinet members, politicians and eminent members of the public whose eulogies were also emotional.