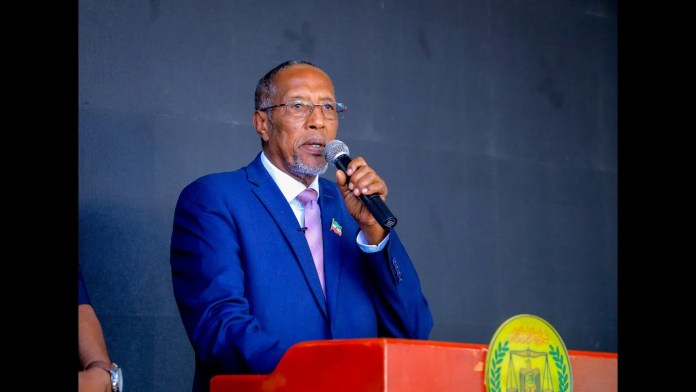 The President of the Republic of Somaliland, H.E. Muse Bihi Abdi, today officially attended the inauguration ceremony of a new groundwater management system and dams established by the Hargeisa Water Agency. The ceremony was attended by members of the cabinet, parliamentarians, the director of the Hargeisa Water Agency, ambassadors, academics and many other dignitaries.

Prior to the start, the Director of Hargeisa Water Agency, Mr. Mohamed Ali Darod, who opened the forum, briefed the progress that Hargeisa Water Agency (HWA) has made so far. The HWA manager further went on and pointed out that this center has been built from the citizen’s tax without any international aid.

Speaking at the event, The Minister of Water Development, Mr. Ali Hassan Mohamed (Ali-Marreehan), for his part, congratulated the Hargeisa Water Agency on its success, underlining that every time taxes are saved, this and similar developments are achieved.

President Bihi Abdi, addressing the gathering, praised the progress of the Hargeisa Water Agency, noting that the agency has reached a critical juncture, creating something meaningful from the small amount of money it has taken from the community, and thus making it worthy of the aspirations of other national institutions. Additionally, the President suggested that efforts be made to contain rainwater runoff, to avoid water shortages and recurrent droughts in the country.