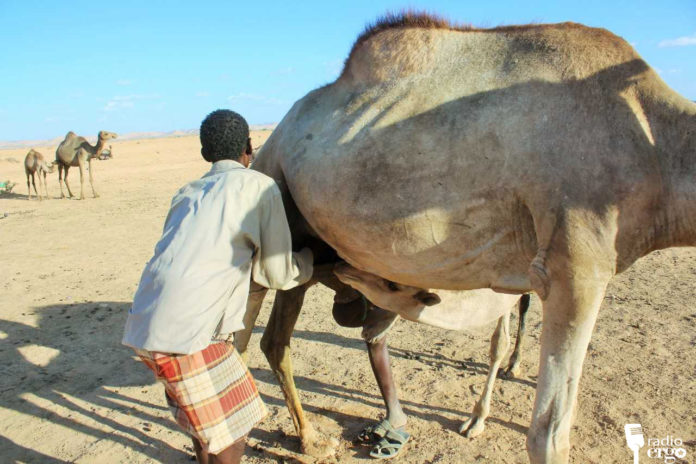 Mohamoud Diriye, 25, used to herd his own livestock, but for the time being, he is happy enough being paid to look after somebody else’s camels as he plans a way to rebuild his family’s past life.

Mohamoud’s motivation in taking a job as a camel keeper in the northern Somali town of Lasanod was to get his family out of the displacement camp at Kabalka-Hargaga, 20 km from town, where they had been living since their entire herd of 180 goats was wiped out in the drought three years ago.

The hand-outs of flour, rice, and sugar they had to depend on in the camp were never enough.

A friend of his had got a job looking after a businessman’s camel son a ranch in Lasanodand encouragedMohamud to come to town as well to find similar work.

Now Mohamoud is earning $180 a month looking after a herd of 170 camels at a camel dairy 10 km outside town.

Mohamoud sends $80 to his family to cover their needs, which has made a big difference to them.

“Their living standards have changed by receiving my support and they also have access to affordable food and better housing. The money I send has helped them to get their normal lives back,” Mahmoud said.

He manages to put away around $100 in savings and is planning to buy his own livestock again in the near future to return to his former livelihood.

The entrepreneurial businessman Mohamoud works for is Abdirahman Jama Mire, who opened his camel dairy in Lasanodfour years ago.

He employs nine people, including four who lost their own livestock.

The camels are reared on sesame seed residue, grass, and porridge and are watered once a month.

There are 24 camel ranches outside Lasanod, employing 45 young people from drought-stricken families.

Mustafe Mohamed Absiye works on one of them, looking after 180 camels with seven other young men, earning $120 a month.

It took him a year to find a job after coming to Lasanod. He was keen to help his family of eight living in Dharken refugee camp, 90 km south of town, where the moved after losing their herd of 300 animals in the drought in 2017.

With his income, his family’s life has improved and they have a good home with better food.

Mustafe also plans to send his six children to school. He sees the advantages of rearing camels without having to move from place to place in search of food and water.

“The animals living in this place are different,” Mustafe says. “Some are herded with dogs and others stay at the base.  Domesticated animals like these are better because they don’t require a lot of work and the output of milk is greater.”