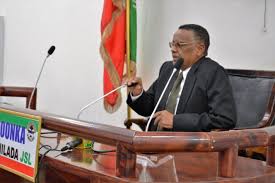 HARGEISA–Somaliland Standard has learnt from reliable sources that MP’s are preparing a motion of no confidence against the Speaker of the House of National Assembly of Somaliland.

It is confirmed that more than 40 MP’s have promised to vote against the House Speaker, Hon. Bashe who is accused of breaching the Lower House of parliamentary by laws.

The MP’s have said that the motion will be tabled in the House of Assembly on the coming Saturday which coincides once the parliament members will return from a brief recess on the occasion of marking Eid Al-Adha.

Members of Somaliland parliament have revealed that a lot of explanations will be made in the day to come once MP’s returns to work.

Hon. Bashe Mohamed Farah was elected to the chairmanship after his predecessor, the Wadani chairman, Abdilahi Iro vacated the seat in order to contest the 2017 presidential polls in which he was defeated by the incumbent president, Bihi in a landslide victory.