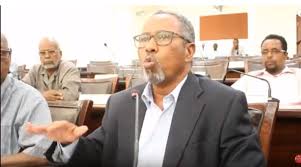 In a lengthy speech at the floor of the House of Reps, Wadani party lawmaker said President Bihi will be held liable for the standoff over electoral commission which deferred the elections for the past two years.

The lawmaker Husein Ahmed Aidid argued that the president could have figured out the controversy in one month by naming an independent committee to investigate delegations against the electoral commission.

Following that the lawmaker held the president personally responsible for all the failures of the mediation efforts which were aimed at overcoming the election standoff.

He cited the initiatives such as the int’l partners brokered an agreement over the number of the members of the NEC and the one proposed by the mediation committee of the elders last year.

In addition, The parliamentarian scathingly criticized the draft law of the new electoral law which reportedly opens the registration of new political parties soon.

He argued that the current law in place stipulates that the political party will be active for ten years and that the new law could not shorten their mandate.