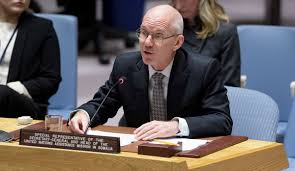 The United Nations has called on the stakeholders of the Republic of Somaliland to hold overdue election i n 2020.

Addressing the UN Security Council, UN envoy to Somalia, James Swan said elections must be held in SL were parliamentary election was held in 2005.

Mr. Swan urged authorities and all political actors to find a way through the current impasse for both parliamentary and local council polls to take place in Somaliland before the end of 2020.

Somaliland authorities have postponed its parliamentary election on several times despite protests by opposition parties.

The UN, the EU, and all other int’l partners have exerted great efforts to overcome the standoff between the political parties in Somaliland in abid to hold the elections.