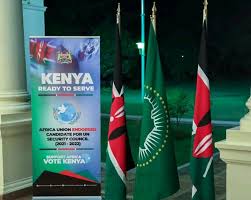 Somaliland has congratulated Kenya for clinching the United Nations Security Council non-permanent seat on Thursday in the UN headquarters in New York and challenged the East African nation to use its new position to foster peace and tranquillity in the Horn of Africa.

Somaliland envoy to Kenya Bashe Omar Awil in a statement said the victory by Kenya was a clear testimony of the confidence the UN members had on the country.

“On behalf of the Somaliland Liaison office in Nairobi and the people of Somaliland, I take this earliest opportunity to congratulate Kenya for earning the seat to the United Nations Security Council for the year 2021-2022. Indeed, the election of Kenya by the members of the United Nations is a clear manifestation of the respect and confidence the global family holds Kenya” said Ambassador Omar.

“It is my hope that Kenya will use the position to foster peace and tranquillity in the Horn of Africa and play the role of Africa’s ambassador to the UN,” he added.

Omar further said Somaliland will continue to lobby Kenya to push for his country’s agenda of self-determination at the UN.

And Somali Minister of Foreign Affairs Amb Ahmed Awad on a posted tweet said they are confident Kenya will be working in the interests of the region.

“On behalf of the government and people of Somalia, I wish to extend my sincere congratulations to Kenya for getting elected a non-permanent member of the UNSC. We are confident Kenya will represent our region’s interest,” said Amb Awad.

Their comments came the same day both Somalia and Somaliland concluded historic talks mediated by Djibouti who was Kenya’s opponent in the race for the UNSC seat.

Kenya was declared the winner on Thursday night, after beating Djibouti with 129 votes against 62 in the second round of voting at the UNSC headquarters in New York City.

Kenya enjoyed the support of the African Union, even as Djibouti pushed to have the seat due to Nairobi’s past participation on the Security Council and the principle of rotation.

French-speaking Djibouti and English-speaking Kenya both highlighted their roles in seeking peace on the Horn of Africa, as well as their contributions to UN peacekeeping options.

Curiously, Somalia, which has sued Kenya at the International Court of Justice over a maritime boundary, publicly supported Djibouti citing ‘brotherly’ ties. Djibouti, in turn, gathered Somalia and Ethiopia for a summit on Somalia and Somaliland and pitched again.

It means Nairobi can, from January 2021, return to the UN’s most powerful organ after 23 years where it will be part of key decisions on global peace and security. India, Mexico, Ireland and Norway had been elected earlier on Wednesday.

Some of those decisions, Kenya may be involved, may include sanctions, authorizing the use of force to preserve peace as well as electing judges of the International Court of Justice.

Working alongside the five permanent members with veto powers (Russia, UK, US, China and France), Kenya will join nine other non-permanent members and could get a chance to preside over the Council’s sittings, an influential opportunity to influence agenda.