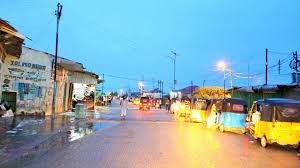 Lasanod, Sool’s provincial capital has taken another step towards a greener environment with the installation of new solar powered and LED Street lights. The ministry of energy in Somaliland has spearheaded the project and the second phase of the project has been launched. The Director General of the energy ministry has laid the foundation stone where more than 70 LED street lights will be installed in the major roads in Lasanod. A ceremony organized for the launch that the officials who spoke stressed that the installation of solar powered lights will improve security and the beautify the city. Mr. Abdirahman Abdek, the DG of the ministry of energy has said that they have brought the new solar powered lights which will be installed in the streets. He also stated that those solar powered street lights which stopped working will be replaced with new ones. He urged Lasanod residents that they will be liable for the protection and caring of the street lights. Lasanod mayor, Mr. Abdiasis Hussein Hasan has reiterated that the solar powered streets lights were much needed in the city and will continue their efforts until the street lights are installed in all streets in the city. The regional governor expressed thanks to the energy ministry and said that this is not enough. The projects comes at a time where solar powered street lights which were previously installed in the city streets stopped operations and once the local council terms has expired.