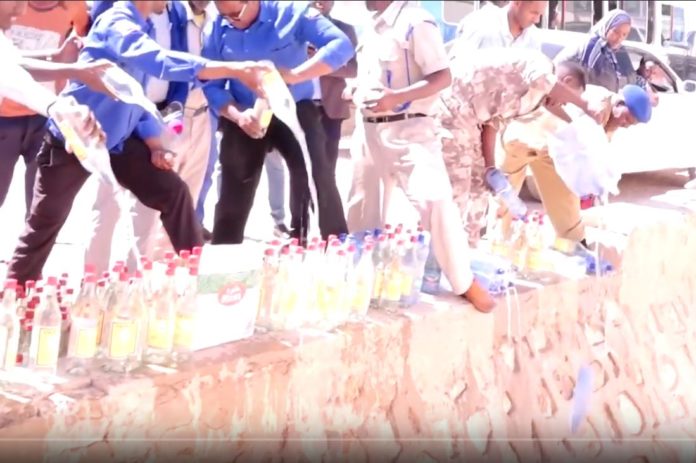 Marodijeh-East Police Commissioner, Abdi Ali Hayd, said capital police have seized dozens of cartoons full of contraband alcohol drinks which were imported from Ethiopia and some of the products were repackaged into Drinking water bottles and jerrycans.

Hargeisa Regional Court, Prosecutor and Police have publicly poured the alcohol drinks into the sand and destroyed the containers in public place.

Hargeisa Regional Court has convicted the four arrested persons and sentenced them to four years in prison and fined 5 million Somaliland Shillings to each of those convicts. The court also fined the car transporting the illegal items, to 5 percent of its current price.

Due to changes to leadership, Somaliland Police have increased their fight against smugglers of illegal businesses such as alcohol, weeds and meth drugs and arrested numerous persons in the main towns of Somaliland.

The new Police command has asked Somaliland citizens to shun from the illicit business and urged them to report cases of individuals trading on other drugs like weeds.

Somaliland is a 100 percent Muslim country with strict regulations on alcohol use. All kinds of alcohol are forbidden under the Somaliland laws and in correspondence with the Islamic Sharia.

Those who found the use, sale and distribution of all kinds of alcohol and other drugs are arrested for long term prison and their belongings of the alcohol being burnt down or destroyed. Somaliland